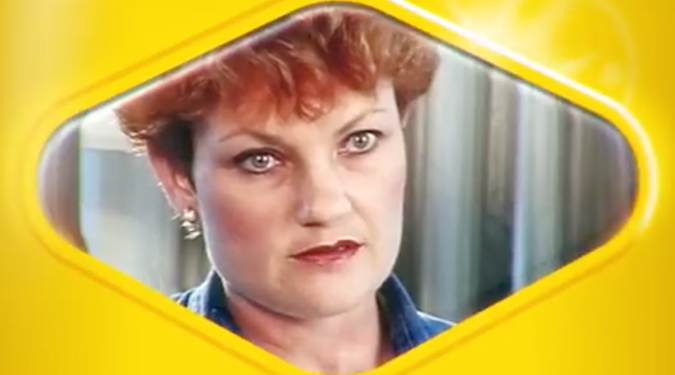 Vegemite’s return to television has been met with mixed reactions, particularly regarding at the campaign’s inclusion of Senator Pauline Hanson and convicted criminal Chopper Read.

Vegemite’s new ‘Tastes Like Australia’ campaign, courtesy of Thinkerbell, launched over television, digital and outdoor last week. The ad was met with a flurry of criticism online from Australians protesting controversial Queensland Senator Pauline Hanson and infamous criminal Chopper Read being used as representatives for the ‘taste of Australia.’

The TVC – in both its 30 and 60 second forms – opens with Hanson’s famous “please explain” clip, followed by a montage of Australian iconography, including The Big Banana, The Twelve(ish) Apostles and Rebel Wilson.

“The ‘Tastes Like Australia’ campaign is topical, thought provoking and aims to promote a discussion about national pride, difference and unity,” says Adam Ferrier, Thinkerbell co-founder and chief thinker.

“While the intent of the campaign is clear, a true celebration and embrace of our unique nation and Vegemite, there is no doubt the interpretation of the creative elements could spark some heated discussions.”

Ferrier’s predictions were realised in the form of internet comments:

I don’t know why @Vegemite chose Pauline Hanson to lead off their latest ad campaign….she’s salty, bitter, industrial waste that some love but most people find unpalatable and if you consume too much of her black, sludgy shitte it’s really, really bad for you….oh wait.

The campaign marks 95 years since Vegemite became a part of the Australian fabric, returning to Bega’s Australian ownership early last year. “Vegemite is uniquely Aussie and that’s one of the things we absolutely love about it,” says marketing manager at Vegemite, Matt Gray.

On the campaign, Gray comments, “It’s relevant, it’s fun and highly distinctive. But more than anything, it’s ultimately a toast to this great nation and a spread that well and truly deserves its place in the pantry as a true, Australian icon.”

According to Gray, the Vegemite campaign has more to offer this year – teasing ‘big things’ arriving in the coming months.

Previous Article
Nielsen: Australians sick of banks, two million switching by 2019
Next Article
The Wild West of the internet – Reddit may be your brand’s secret weapon