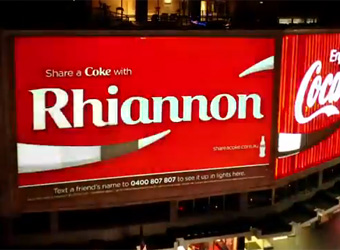 Ogilvy Sydney’s ‘Share a Coke’ and Clemenger BBDO Sydney’s ‘Aus to USA’ for Virgin Australia campaigns scored gold. It was the fourth category win for ‘Share a Coke’, which saw people’s names printed on Coke bottles and the infamous Coke billboard in Sydney’s King’s Cross, with the campaign also scoring gongs in the Direct, Promo & Activations and PR category.

GPY&R Melbourne’s ‘Mobile Medic’ for the Australian Defence Force won silver for Outdoor, adding to its tally which includes gold in Promo & Activations and Direct categories.

GPY&R also won for its campaign for the Australian Football League, scoring three bronze for different iterations of the ads.

The Grand Prix was jointly awarded to Germany’s Jung von Matt agency for ‘The Invisible Drive’ for Mercedes and Ogilvy Shanghai for ‘Cokehand’.