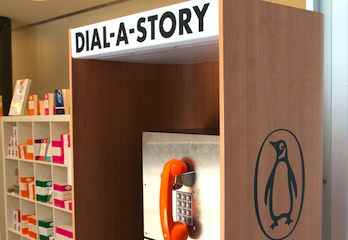 An old-school phone booth in Melbourne’s Docklands new Library at the Dock invites visitors to pick up the phone and hear a story from their favourite author, then share one of their own to be recorded.

‘Dial-a-Story’ is a collaboration between Penguin and creative technology agency Sandpit.

The authors then invite the participant to leave their own message. Those who do so receive a unique ticket with an ID and URL to share their story via Facebook or Twitter.

Federation Square’s ‘Light in Winter’ festival that took place last month put a twist on the traditional event survey with a video confession booth asking visitors to reflect on the festival’s theme of ‘shrines’.

Inside the booth, a custom-build iPad app asked visitors questions around the ‘shrines’ topic such as: What would you build a shrine to? Where would it be located? Who would you take to visit the shrine?

An in-built GoPro video camera recorded participants’ answers, uploaded them to Federation Square’s Vimeo channel and played them on the venue’s big screen.

Stories ranges from shrines to family and lost loved ones to football teams, Nelson Mandela and pet guinea pigs.

“Footage was surprisingly unique, diverse, honest, and most importantly, directly connected the audience to the theme in an authentic way,” Cohen said.