Fly there, live there: Qantas teams up with Airbnb

Fly there, live there: Qantas teams up with Airbnb 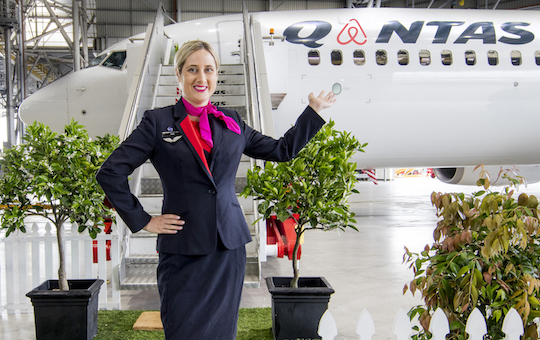 Qantas awards frequent flyer points to members who book accommodation through Airbnb in a new partnership.

Qantas and Airbnb have today announced a world-first partnership which will see Australian travellers earn Qantas frequent flyer points when they stay book their Airbnb via qantas.com.

The announcement is marked with a series of videos that feature Qantas flight attendants explaining the features of various Airbnb accommodation listings in the style of an in-flight safety demonstration, as well as ‘fly there. live there’ campaign material.

Qantas frequent flyer members will receive one Qantas Point for every dollar they spend on any of Airbnb’s 2.5 million places around the world.

It’s the first time Airbnb has worked with an airline in this way.

“The way that people around the world plan, book and experience travel is changing rapidly with the digital revolution,” says Qantas CEO Alan Joyce.

“We know many of our customers are just as likely to arrange an Airbnb as they are to book a hotel, and we wanted to recognise and reward them for that.”

“Our announcement today with Qantas highlights the rapidly growing movement towards the personalised and unique experiences available through the Airbnb community,” says Airbnb CEO and co-founder Brian Chesky.

The announcement sees Qantas embrace yet another modern consumption model, with the announcement on 30 September that its in-flight entertainment will now include independent Australian podcasts, including the popular health and lifestyle ‘Slow Home’ podcast.

Here’s the ‘Fly There. Live There: Tokyo’ video

Here’s the ‘Fly There. Live There: Sydney’ video