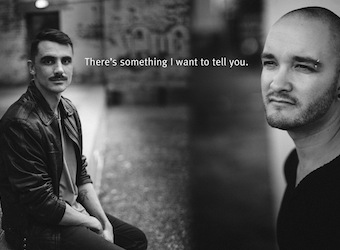 Campaign:E.N.D. H.I.V. and ‘There’s something I want to tell you’

Queensland has seen cases of HIV more than double in the last 10 years. In an aim to put a full stop to HIV, the Queensland Government originally launched its ‘E.N.D. H.I.V.’ Campaign in July 2013 with advice from the former Ministerial Advisory Committee HIV/AIDS (now HIV Foundation Queensland).

People living with HIV face multiple challenges, but with treatment it is no longer a death sentence. However, it can be a life sentence and to reinforce the safe sex message and address issues of discrimination around HIV.

Research has shown that while the gay community as a whole is aware of safe sex messages, people choose not to use condoms for a variety of reasons.  Testing is ad hoc and there are real concerns about stigma not just in the gay community but in the wider community, too.

There is a human side to HIV in Australia that needed a voice. An important part of the foundation’s strategy has been to deliver effective prevention and testing messages.

The objectives of HIV Foundation Queensland’s campaign are to:

What MediaCom set out to devise, was a powerful awareness campaign for HIV that aimed to break down the stigma sufferers of the disease experience, while educating about the risks and consequences of HIV.

It was easy in the 1980s as there was one message – wear a condom. HIV wasn’t part of the conversation, it was all about AIDS.

MediaCom in conjunction with Hoodlum set out to share real HIV stories – they didn’t use actors – just real people speaking from the heart, in their own words. The HIV Foundation felt this was essential to provide a fresh and honest look at HIV today and to provide a real face to deliver these important messages.

The ‘There’s something I want to tell you’ campaign was to be centred on the following three important themes:

MediaCom on behalf of HIV Foundation Queensland and the director of the short films, Mikey Trotter, spent a month interviewing some incredible Queenslanders, which were filmed and produced by Hoodlum.

The people chosen were living with HIV either because they have it, or because someone they love does. They bared their hearts and souls and it was an inspiring journey, out of which three powerful films were produced, each dealt with one of the three chosen themes: reducing the stigma around HIV, encouraging and supporting more HIV testing and encouraging prevention.

The music featured throughout the film is an original score created specifically for the series. The intention of composing original music was to highlight the strength and dignity of the people sharing their stories about HIV. These stripped back arrangements were used to highlight emotion, convey tension and allow the viewer to breathe through difficult story moments.

The most poignant message behind the music was that these are real people, just like anyone else, who are continuing to live their lives after being diagnosed with HIV. The music became an emotive guide and provided integral support to the story. It dictates emotion and pace and reveals the stigma they and their loved ones deal with every day. Despite misconceptions surrounding HIV, the films show they live with optimism and enthusiasm for the future.

The films are designed to primarily target the gay community and men who sleep with men (MSM), but the wider community has also been encouraged to view the films to dispel the myths that surround HIV.

The ‘There’s something I want to tell you’ short series of films that resulted from this powerful HIV awareness campaign has helped to change attitudes towards HIV.

The ‘Stigma’, ‘Prevention’ and ‘Testing’ videos received very high engagement and interest with an average watch time of 3:79 minutes or 53% for all three videos. For content over seven minutes, this is well above average. Organic audience retention was high with 45% of the audience watching the entire video.

As far as engagement goes, the ‘Stigma’ video was the clear campaign leader. It was the most sharable piece of content too with lots of interaction, likes and comments on social media. The earned media interaction came to over 750 shares, comments and likes between Facebook and Twitter, as a result of nine articles in the media about the topics raised.

The editorial seeding aspect of the campaign was highly successful in reaching a niche audience with a message that really resonated and hit home. The views that resulted from the editorial component of the campaign were much higher than expected, with engagement being the main KPI for editorial seeding, but also the level of interaction and in particular, shares were significantly higher than anticipated.

Tags:
Previous Article
The 10 most popular marketing op-eds of 2014
Next Article
How to make sure those Christmas shopping carts convert