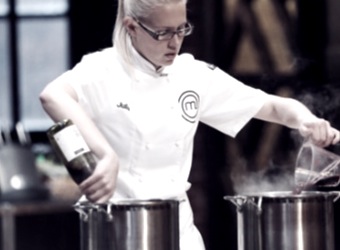 Researchers at Murdoch University are comparing the Aussie love of sport with the nation’s obsession with MasterChef. Dr Felicity Newman and Dr Barbara Evers contend that changing social views on public emotion have led to the creation of new outlets for emotional display.

“In their research on sport, [researchers] Elias and Dunning came up with the term ‘quest for excitement’ to describe society’s search for a balance between restraint and pleasure,” Dr Evers says.

“They contend that as society has become more civilised, strong emotions such as violence and lust have moved behind closed doors. A civilised society doesn’t have public hangings. But this has led to a less exciting society.

“In looking at the MasterChef phenomenon, we believe the show fits into a ‘quest for excitement’, because it allows people to give up emotional control, albeit in a very controlled way. We call it contemporary culinary sport,” Evers says.

The researchers have identified ways in which the show creates tension, including its purported aims and style.

“MasterChef claims to be educational and aspirational – the quest for the best chef – but this doesn’t fit well with its soap opera style. The cast is expected to be interesting, but also skilled, which leads to emotional outbursts,” says Newman.

“The vulnerability and tears reveal the inherent tension between professionalism and drama in the kitchen. In the real world, they don’t go together. I’ve worked in professional kitchens and it is very rare to see anyone have a breakdown because their kingfish Carpaccio doesn’t turn out.”

Researchers also point to casting designed around sexual, gender and ethnic stereotypes. The final five saw a Muslim woman, Samira, asked to create a pork hot dog – with her story playing out in tandem with the election debate about boat people and refugees.

Christina Batista, whose backstory was repeatedly mentioned – having had two children with her husband and then leaving him for a woman – drew on social notions of family values and sexuality.

“Our research is ongoing, and will include a look at how class, gender, sustainability and education are represented on the show.”

Tags:
Previous Article
What’s inside the October-November issue of Marketing
Next Article
Get out your wallets, paywalls are in