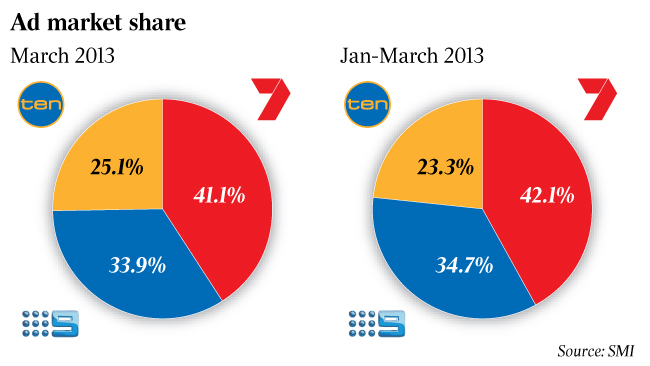 Seven Network continues to dominate in the metropolitan free-to-air advertising market with over 40% of media agency bookings in the first quarter of the year, while Ten’s prospects are looking brighter, notching its highest share since mid-2012.

According to the latest data from the Standard Media Index (SMI), which collates actual agency bookings, free-to-air networks’ share of media agency bookings from January to March 2013 were dominated by Seven (42.1%), with Nine (34.7%) and Ten (23.3%) trailing.  There’s brighter news for Ten, however, with The Australian reporting today’s figures as the network’s best since July last year.

For the month of March, the total advertising market fell 2.24%, although the Easter long weekend could be a factor. The digital category continues to grow, up 19.9%, while newspapers took another hit, falling 17.4%. It wasn’t good news for magazines either, falling 18.4%. Regional TV also dropped 9.6%.