The mobile payment scene has been a hive of activity in recent months, with trials of Google Wallet beginning in the US, bringing wallet-free potential through near-field communication (NFC) technology that is likely to become a standard feature of smartphones in the coming years. Experts advise, however, that NFC payment systems are still several years away from taking off.

Right now it’s credit cards that are ubiquitous, and Square is a small credit card scanner that plugs into an iPhone’s headphone jack. With an accompanying app, merchants can process payments. As Mashable points out, it’s a solution for retail entrepreneurs who frequently can’t answer ‘yes’ to the question “Do you take credit cards?” 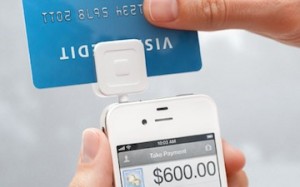 Businesses that Square is most suited to might be vintners who frequent trade shows to market their products, and, instead of just handing out free samples, Square allows them to make sales to cashless attendees without the need to set up a merchant credit card account.

Or you might be the owner of a food truck, or sell your organic jam at farmer’s markets, be a dog walker, or be involved in some other low-tech business and are turned off by the cost of setting up a vendor credit card processing account.

Square currently gives away the scanning device for free, making it a barrier-free set up for merchants. Then, as well as taking a 2.75% cut of every transaction, it collects a bucket load of sales data, bringing analytical potential to trades that previously had little.

Square is now claiming its 1 millionth merchant since being launched in late 2010 by Jack Dorsey, of Twitter-founding fame. And with the aforementioned Google Wallet in active trials, and online payment service PayPal also making forays into the mobile wallet world, it’s a space worth keeping an eye on for developments.