With now almost 16 million consumer mobile phones in Australia, every half-point swing in market share can signal around 80,000 services won or lost according to the 2013 Services in Operation (SIO) data research from Roy Morgan.

Telstra appears to have won the year, picking up over 400,000 new services. Telstra made SIO gains each quarter and is now nudging 40% market share. Optus’ share remained relatively flat, finishing the year up 0.1% points, but a downturn for its majority-owned  Virgin Mobile has the group down 0.3% overall.

Virgin’s final quarter decline coincided with a solid improvement for Vodafone, its chief competitor in the younger market. Vodafone stemmed the outgoing tide to recoup nearly all the share it lost in the first three quarters. 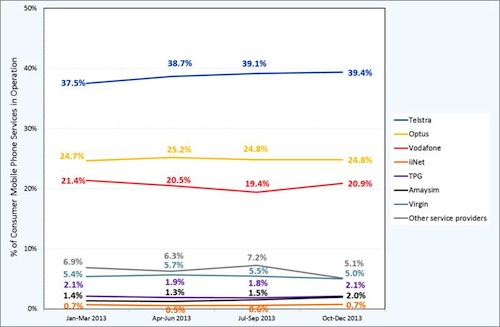 The share for Amaysim on the Optus network rose 0.6% points in the year, representing a 43% proportional gain for the MVNO. In fact, Amaysim gained almost the exact same number of services in 2013 as did Optus.

Perhaps due to ROI considerations and the intense competition in the consumer mobile space, internet providers (and Optus MVNOs) TPG and iiNet have so far been lax in pitching their mobile services to their large customer databases. Each finished the year right where they started, at 2.1% and 0.7% of market share respectively.

Mid-2013 saw numerous MVNOs fold, most notably Kogan, which helped send the market share for ‘Other’ operators drop over 2% points from Q3 to Q4.

“We have been investigating the reasons consumers choose to stay with or change their mobile service providers and how well these companies are identifying the meeting the changing needs of consumers.

“A strong value proposition of ‘reliable network coverage’ is the dominant reason that consumers are attracted to market leader Telstra, while MVNOs such as Amaysim (winner of the 2013 Roy Morgan Mobile Provider of the Year Customer Satisfaction Award), own ‘cheaper rates’ and have made great steps to attract those consumers dissatisfied with incumbent  providers.

“Our data shows that Optus currently lies as a safe option for consumers seeking to balance price with coverage, and stay with a service provider with a good reputation.

“Vodafone’s recapture of share in the last quarter of 2013 coincides with their heavy promotion of faster download speeds, suggesting this strategy is resonating with consumers.

“In such a competitive space, every pinprick of an opening to respond to the needs of consumers is an opportunity to gain market share: to get in there, advertise and deliver, own the space and expand it.”