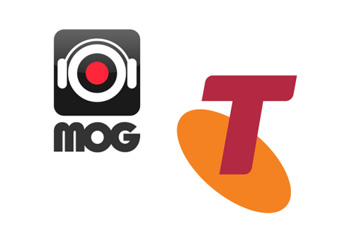 The battle for supremacy in the music streaming market has begun with Telstra launching a service in response to recent launches from Samsung, Sony, Rdio, Vevo and the upcoming launch of Spotify.

The telco has joined forces with an American company, MOG, to launch the service, which will enable subscribers to stream from a library of 15 million songs to their mobile, tablet, computer or smart TV. According to the Sydney Morning Herald, MOG has been running in the US since late 2009 and charges up to $US10 a month to stream or download music.

No pricing information for ‘MOG powered by Telstra’ has been released yet, however director of media at Telstra, J.B.Rousselot, says the offer will make it a ”very attractive proposition” to consumers.

“The days of storing CDs or loading your playlists onto all your devices are coming to an end,” Rousselot says. “The number of subscribers to mobile music streaming services is expected to approach 161 million worldwide by 2016 and Australians will become a part of the music revolution with this deal.

The service will provide access to ad-free, unlimited access to MOG’s music library for “less than the price of a CD each month” and will incur no download charges for Bigpond subscribers.

The service will join a joint venture between Universal Music and Sony Music called Songl, Rdio, founded by the people behind Skype, Samsung’s service, and Spotify, the world’s largest music streamer, whose launch in Australia has been delayed.

Managing director of Spotify Australia, Kate Vale, told the Herald that most of its business came through the desktop service that allows people to listen to music free but with ads, and the remainder through its premium service that, like MOG, will enable people to stream or download music to any device.

”When I listen to music I would prefer to pay less and have access to more,” Vale says, predicting consumers will drift away from iTunes in favour of streaming services.

Revenue from digital music services, either streaming services or downloads, is expected to grow 160% by 2015 to equal $0.3 billion, according to Boston Consulting Group. PricewaterhouseCoopers’ ‘Entertainment and Media Outlook’ report agrees with this estimate, placing the industry at $290 million by 2015.