The network effect: How technology is transforming the way we connect

The network effect: How technology is transforming the way we connect 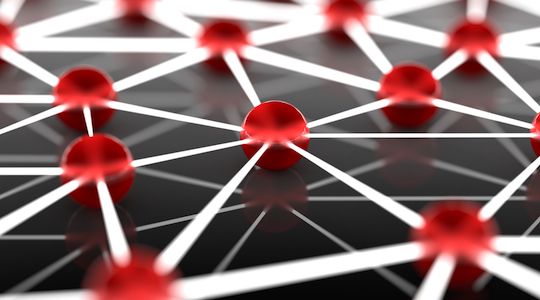 Humans are hardwired to connect, because we recognise that we do better together than apart – this is a deep-seated survival instinct. Technology is just a magnifier for this instinct. And, as the tech advances, so do the number of new and interesting ways that humans will find to connect to each other.

For all of our existence connection has come through art, information and celebration. At that level, nothing has changed. But the scale on which we connect has exploded on the back of the devices that fill our lives, and the importance and meaning behind that connection is being enhanced by the information – the data – that now lies beneath it.

What we see emerging are clear channels where connection is flourishing, and new connections between those channels are appearing at a dizzying pace.

At the forefront of the new age of connection is the Internet of Things (IoT). [Ed’s note: for more on the IoT see our infographic]

Micro objects such as GPS (global positioning system) cat collars, fitness wearables, iBeacons and even glucose-sensing contact lenses are becoming part of our world, accompanied by a torrent of data connected to your daily life and interactions – all to drive personalisation and convenience.

Embedded cameras in practically everything – no longer just our phones – continues to grow the IoT. A GoPro could rapidly become a ‘factory option’ on your bike, car or boat – a logical extension of the selfie.

Life streaming is a result, whether via YouTube, Pinterest, Twitch or Tumblr, or even for just a fleeting moment on Snapchat, as the things we ride on and play with share our experiences with the world. Real-time streaming for all is the next step in that journey, bringing distant spectators ever closer to the action.

Even our cars are poised to join the IoT – already connecting to your device, but also through dedicated hardware/software suitable for cars such as Apple CarPlay.

What is emerging is, in effect, a personal cloud, which allows your media and preferences to travel with you, but also effectively treats the physical objects (the car, in this case) as if they were apps to suit the user.

And with preferences come metrics – how far, fast, maximum time, minimum time, traction control activation, braking forces. Even the gamification of driving to encourage better, safer and more economical driving is just around the corner. Before, of course, we are eventually disconnected from driving altogether by self-driving cars.

Eventually, a tipping point will come when it will be cheaper to insure an autonomous vehicle than a human driven one. Gradually, the connections between cars will enable smarter traffic management, automatic routing and, most importantly, the liberation of humans from having to focus – so they can do other things – like talk, shop and connect.

Connection was also once something that happened somewhere – our homes, the mall, the church or school – the places where we gathered. Or perhaps at a distance through letters and phone calls.

Sociologists even designated the idea of a ‘third place’ – neither home nor work, but perhaps a pub or sports club where people could feel included and thereby find connection. Now connection happens anywhere and at any time, from an idle moment alone at the bus stop to a major sporting fixture surrounded by thousands of fans – we are using the mobility of our devices to remain hyper-connected to the deep niches of the tribes of our choosing.

Connectivity has grown due to the network effect – there are already so many installed devices, and yet only three billion people are connected, with four billion to go!

Each new device improves the value of the whole. As the network scales, the innovations emerge because of the number of connections, rather than any fundamental change in the capability of the devices per se.

Of course, the hardware (and its software overlord) is galloping ahead in leaps and bounds too. And, in combination, hardware, software and the network are responsible for the largest, and fastest social change in human history.

Mobile has emerged as a primary channel for social: which is the platform, which is the medium, which is the channel? But the connection afforded to your select group(s) during your spare and interstitial moments is unprecedented.

Then there is the shift of the form factor, gradually moving to ‘anything is a screen – anything can be your screen’ through innovations such as AirPlay, reducing the problem of the ‘tyranny of the rectangle’ where all digital experiences were being mediated via small screens. Mobile goes beyond apps and web, to the native, de facto way that all computing is done, and the line between mobile and non-mobile vanishes.

The ‘any screen’ idea above is the salvation of mobile, because it liberates us from the antisocial, single user, isolationist paradigm to which mobile has evolved today. Ad hoc networks of friends’ devices, all sharing out their ‘public’ profiles to nearby screens may be a new way for people to connect and interact. Happily, the social contract will mature too, and the hope is that genuine human interaction – that as yet unparalleled experience of face- to-face time – will return to being equal or better than the narcissism of the personal screen.

And so, through this extraordinary evolution in connection, we can begin to see a change in brands and their positioning. As the gap between the brand message, the customer and product narrows, the scramble for customer mindshare only intensifies. And so, the brand messaging looks to become more authentic, and more able to tell a relatable story.

Patagonia recently released a 30-minute YouTube segment telling the stories of how its garments were passed down between generations – almost an anti-sales message, and yet one that conversely makes the brand look both truthful and attractive. The hook is, of course, our connection with those telling the stories, and how strongly we identify with them.

These deep niches allow us to connect to a variety of people that we like, respect or aspire to be like. And, due to the speed and ease of the connections, we can be part of many of these niches simultaneously, each with their own story. Stitching together these narratives means we retain our much valued ‘individuality’. This is not to suggest that we are just the sum of our purchases, however; rather, in some cases, we are just more conscious of what, and why, we buy and consume the things we do. In my book, that’s a good thing.

In real terms, there is only one degree of separation between three billion humans via their smartphones.

But, there is a price: our social structures, our legislation and our manners haven’t yet caught up. It may be argued that we are only in our toddler-hood of technology – not even yet in adolescence. There is a plenty of opportunity to grow up and, when we do, the future will look pretty interesting.

Adobe is a Marketing content partner – a non-financial collaboration on content for the magazine and exclusive benefits for Marketing Advantage Members. Click here to become a member.

Tags:
Previous Article
Are you one of the marketers suffering from Neon Light Syndrome?
Next Article
MarketingTV: What ‘customer-centric’ really means to NAB, Virgin Mobile, Australia Post