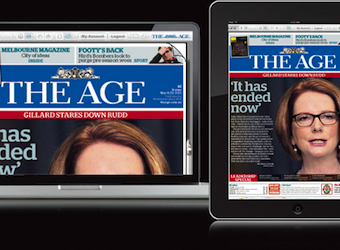 Australians continue to buy 17.5 million print and digital newspapers each week. And of that, paid digital editions are on the rise with sales of Australia’s major newspaper publishers’ national and metro mastheads detecting major upward trends, particularly over the January to March period.

According to the Audit Bureau of Circulations audit period, the shared weekly sales of the Monday to Friday digital editions of The Australian, The Sydney Morning Herald and The Age reached 659,735.

Year-on-year growth comparisons are available only for The Sydney Morning Herald and The Age digital sales. There was a combined increase of 86.6% for their Monday to Friday digital editions in the latest quarter compared with the previous corresponding period in 2012. (The Australian was not yet reporting digital sales in the January to March 2012 quarter).

The weekly total paid masthead sales for Monday to Friday editions of The Sydney Morning Herald, The Age and The Australian in the latest quarter was 2,492,655.

A steady decline in printed newspaper circulation in the latest quarter is again to blame for the rise of digital with major publishers moving forward with their long-term strategy of cutting low-yielding copies and guiding print readers into the digital light.

Moving from newspapers to the mass women’s weeklies magazine category, and its two major titles, New Idea and Woman’s Day are flying according to the latest 2013 Roy Morgan readership figures.

Both grew their readership, increasing by 15.9% and 4.9% respectively, despite the continuing difficult retail conditions that have dampened consumer spending.

The latest Audit Bureau of Circulations (ABC) data reported that 1.66 million copies of weekly magazines are sold each week; a win for print in the digital-focused age.

And it seems that niche titles the likes of consumer interest: homemaker, health, food, specialist car and motorcycle, sports such as fishing and golf and gaming and IT categories have all developed in readership.

In a further plus for print, total magazine readership declined only slightly from 0.05% period-on-period and 1.6% year-on-year.

Magazine Publishers Australia (MPA) executive director Robin Parkes explaining: “We are really encouraged by the resurgence of interest in weekly women’s magazines, which are traditionally the key indicator of the magazine industry’s health.”

Parkes believes that the rise of new personalities on the plethora of reality TV shows bombarding Australian screens at present is playing some part in attracting readers.

And despite the magazine sector also suffering from budget cuts, Australian consumers still fork out $850 million plus on magazines every year.

93% of adults still read magazines and 13.5 million magazines are sold in Australia every month with social media integral in spreading the word.

“Our recent social media initiative earlier this month showed the level of reach and engagement that magazines have, reaching an audience of almost five million in just one day. Among the social media commentary, many readers expressed their love for printed magazines,” says Parkes.