World’s first petition-signing robot: ‘The Most Powerful Arm Ever Invented’

World’s first petition-signing robot: ‘The Most Powerful Arm Ever Invented’

Save Our Sons, a small charity for Duchenne muscular dystrophy (DMD),  used ‘The Most Powerful Arm Ever Invented’ to approach government seeking funds for crucial clinical trials of a new treatment. Creating the world’s first petition-signing robot in this PR campaign captured the public’s attention and support.

Campaign: ‘The Most Powerful Arm Ever Invented’

Client: Save Our Sons

Save Our Sons is a small charity for Duchenne muscular dystrophy (DMD), a rare and fatal muscle degenerative disease that affects one in 3500 boys. The charity had raised $1.75 million in Australia towards funding crucial clinical trials of a new treatment and wanted to approach government to provide the remaining funds needed.

The charity and disease has a limited public profile and had been unable to secure a meeting with the Australian Government.

To attract government attention, they first needed to gain the support of the public, a significant challenge given the disease’s low awareness.

The ‘Most Powerful Arm Ever Invented’, the world’s first petition-signing robot that would sign for those that can’t, was created to capture public interest and support. Without any budget for bought media, PR was the sole driver for the campaign.

The key objective of this campaign was to raise awareness of DMD with the Australian public and encourage the Government to match the $1.75 million already raised for treatment funding.

The campaign needed to help secure a meeting with the Government to seek funds needed for clinical trials. To do this, a goal of 20,000 or more signatures on the petition was set.

The specific media objectives for the nine-week campaign were to achieve:

TheMostPowerfulArm. com was created as an innovative platform where people could interact with the world’s first petition-signing robot to help build support for DMD. By visiting the site and clicking connect via Facebook, people could watch the robot arm write their name on a petition in real time, before posting a photo of it to their Facebook wall.

Our strategy was to use earned media to tell the story of DMD sufferers and drive people to the robot arm for immediate action. Key media targets were identified across TV, radio, online and print, as well as parenting, lifestyle, technology and health verticals and social media.

A face and spokesperson of the campaign, DMD sufferer Jacob Lancaster, was appointed to bring the campaign to life through his own story, which was highlighted in a video on the website. To add further personalisation and significance to the campaign message, the font created for the robot arm to write in was taken from the last piece of handwriting Jacob created before he lost the ability to write: a Mother’s Day card.

The robot arm itself was so engaging to watch that we believed people would be motivated to share their signing of the petition. 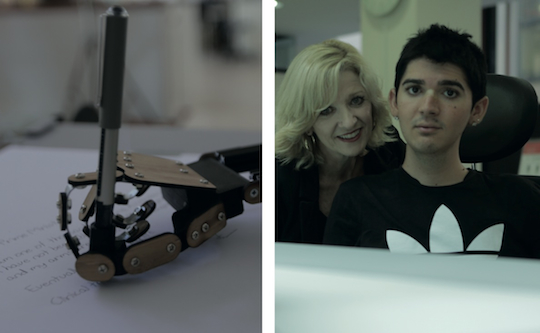 The ‘Most Powerful Arm Ever Invented’ was installed at Sydney’s Customs House on 25 March 2013. We launched the website to media on 27 March.

To drive traffic to the site media pitching commenced two weeks prior to launch. Media were also invited to attend the unveiling of the robot arm, with one-on-one interviews and photo opportunities organised.

Intensive media outreach was conducted across online and TV as top tier targets to drive immediate action, followed by print and radio outlets. Top-rating TV programs were targeted to bring the story to life to a national audience, with opportunities staggered across two weeks to keep momentum. Online outlets were targeted for the duration of the campaign as a ‘one-click away’ approach to encourage signing and sharing.

To tap into highly engaged social media communities, the charity’s celebrity ambassadors were asked to encourage participation and sharing. We created tailored content packages for each making their participation easy. All PR materials contained the call to action to visit TheMostPowerfulArm.com.

‘The Most Powerful Arm Ever Invented’ is the world’s first petition-signing robot arm and it physically signs a petition for DMD sufferers who have lost the ability to write and can no longer sign for themselves.

It utilises unique technology that provides a value exchange between the user and the campaign whereby the robot arm signs your name in real time to support the cause and automatically posts that image to your Facebook wall.

We used the robot arm as the hook and tangible link to the cause, while targeting media to tell a complex story about the little known disease. The robot arm itself was so engaging to watch that we believed people would be motivated to socially share their signing.

Additionally, an output of the campaign was the first Facebook petition to be taken for discussion by the Australian Government. 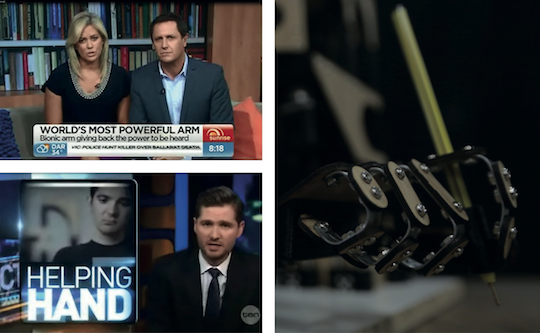 During the campaign, we achieved 193 media articles, including three national TV items (Sunrise, The Project and Sky News) and significant print coverage spanning The Australian, Sydney Morning Herald, The Age and with a combined coverage reach of more than 20 million.

As the only promotion tool engaged for ‘The Most Powerful Arm Ever Invented’, PR was the driver to the website, which resulted in more than 60,000 page views and more than 32,000 signatures, signalling a conversion rate of 52%. This greatly exceeded our objective of 20,000.

96% of coverage contained the call to action to the petition at TheMostPowerfulArm. com.

Across social media, there were a total of 557 posts across blogs, Twitter and Facebook, reaching an audience in excess of three million.

While generating signatures was the core focus, the campaign also generated more than $24,000 in donations for the charity.

The significant media coverage and social commentary generated by the campaign attracted the attention of a number of federal MPs and we were able to secure a meeting to present the petition and table the cause.

The meeting was held in mid-June 2013. It was attended by Jacob Lancaster, his mother Julie-Anne, and MPs from around Australia including Gai Brodtmann, Member for Canberra, Jane Prentice, Member for Ryan, Anne Urquhart, Senator for Tasmania, Warren Entsch, Chief Opposition Whip, Luke Simpkins, Member for Cohen and Jan McLucas, Senator for Queensland.

Representatives from the charity addressed the group and presented the petition. As a result of this meeting, the petition was passed to the Federal Minister for Health, who confirmed receipt of the petition and action is now pending.

In the meantime, a multinational pharmaceutical company contacted the charity and has agreed to commence the clinical trials with funds raised to date, rather than waiting for the total sum required from the Government. This is an incredible outcome for the charity in helping find new treatments to the disease while we await the Australian Government’s final decision.