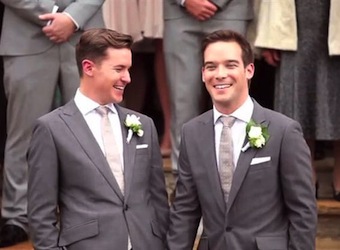 Coca-Cola has sparked an uproar in the press and on the social web after it made the decision to cut a gay marriage scene from the Irish version of its ‘Reasons to Believe’ campaign, with Coke arguing it wasn’t relevant to the market.

The campaign, which launched across Europe after Christmas, features comparisons between the positive and negative aspects of life. Coke has stated that the ad appears slightly differently in each market, tailoring the footage to its different audiences. The Irish version of the ad has cut a scene that features gay marriage.

Irish LGBT (lesbian, gay, bisexual, transgender) publication Eile.ie has publicly criticised Coke’s decision. UK Marketing magazine reports that Coke’s local marketing activation director Brid Drohan-Stewart said at the campaign’s launch in December that the work is rooted in local research, “talking to people on an emotional level about topics that are relevant to them.”

Irish publication TheJournal.ie also reportedly received a statement from Coke which outlined that the “core objective” in the ad is that the scenes resonate with people in each country, to make sure they are “truly representative of cultural issues that they are familiar with and value”.

Coke has pointed out that there is a St Patrick’s Day scene that is only included in the Irish version of the ad because the scene is “truly relevant from a cultural perspective”. The soft drink giant stated: “The wedding images used in the ad for the UK and other parts of Europe show two men getting married. The reason that was changed for Ireland is that while civil partnership for gay people is legal, gay marriage currently is not. This will be the subject of a referendum (2015).”

Here’s the main version of the spot:

And here’s the Irish version:

And here’s the Norwegian version:

And the Swedish version: