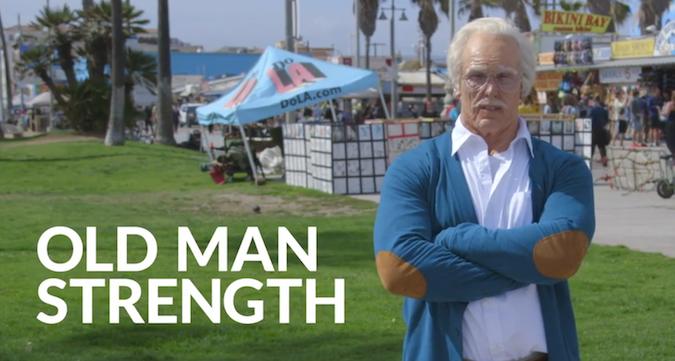 A commercial which sees an athlete go undercover as an elderly man before lifting weights in front of shocked onlookers has achieved 37 million views on Facebook.

Leverich wows the crowd of onlookers and challenges young bodybuilders to increase the weights, outdoing them each time.

At its conclusion, it delivers the tagline ‘made strong, in the fine tradition of making things strong’.

The aim of the commercials are to let youngsters know to “never take their elders for granted, they have too much wisdom to pass down, and thanks to the past decades’ improvements in health and wellbeing, many of them can still put an old-fashioned beat-down on you too,” according to Thrillist.

Here’s the video, see what all the fuss is about

Related: Metro Melbourne’s ‘Dumb ways to die’ video ad campaign recently became the most awarded in advertising history, and was awarded best of the decade at the Asia-Pacific Tambuli Awards »

Here’s the chapter 1 of the Pepsi ‘Uncle Drew’ commercials