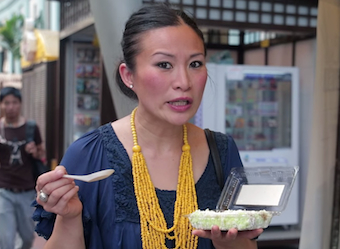 The five-part mini-documentary series is shot in the style of a travel television show, following Yeow through a trip to Kuala Lumpur.

She gives various tips about the hidden secrets of the city, including its best foodie hotspots, shopping haunts and thriving market scene. Unsurprisingly, the videos also include plenty of details about airport and in-flight experience with Malaysia Airlines.

Yeow is the brand’s first-ever ambassador for the airline in the region.

The celebrity cook and author was born in Malaysia, where she lived for nine years before moving to Australia.

Yeow says she wanted to highlight in the series the city’s unique appeal that manages to surprise her on every visit.

“Being a wonderful melting-pot of cultures, Kuala Lumpur offers amazingly diverse styles of

food from world-class dining to old school Chinese Malaysian cafes, and it is a must-visit

for any globetrotting foodie, perfect for a quick stop over or exotic holiday.”

Yeow has also created a signature dish to be served on Malaysian Airlines flights departing Australia until 28 February – Nyonya chicken curry with a roti-style croissant.

Previous Article
Marketing spend set to grow in 2015 but budget constraints Australia’s top issue
Next Article
What is wrong with marketing’s sales leads?