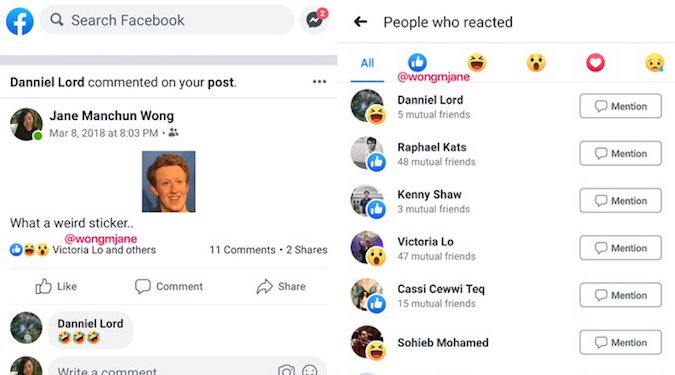 Earlier in the year, Instagram started deploying tests in seven countries including Canada, Brazil and Australia, hiding public displays of Like counts. Users in test markets are still able to view the Like count on their own posts, but within the feed, the post would only show a few mutual followers that had Liked the post. Read Marketing’s full coverage »

Jane Manchun Wong, the software researcher that previously broke Instagram’s ‘hidden Like’ test before release, first found signs that Facebook was planning to expand the idea to its primary platform. Wong found indications of the feature by trawling through code in Facebook’s Android app.

TechCrunch reports that when it asked Facebook for results from the test on Instagram, a schedule for testing or motives behind the expansion, Facebook declined to provide further information.

“In recent years, we’ve seen an increase in the economy of Likes, whereby a like is used as currency to drive business,” James Gilbert, HubSpot director of APAC, tells Marketing. “But while a bunch of Likes are a valuable metric, it’s only a productive marketing strategy if these interactions are genuine.”

“The reports that Facebook is considering following in the footsteps of Instagram seems like a natural progression. The change pushes for a greater value to be placed on followers and comments. It’s never been more important to make use of key engagement tactics. ‘Hope marketing’ (trying random efforts on social media and hoping they’ll work) is a thing of the past. As we move into a social media era whereby visible comments will reign supreme, the responsibility is now on brands to ensure they are building an authentic connection with their audience by reevaluating their social media strategy.”

Anthony Zaccaria, cofounder of Linktree tells Marketing Facebook’s change is an attempt to create a safer and more personalised space for users. “While it’s a nod to that learned psychological trait of comparing ourselves to others through the volume of Likes, it also aims to create a more positive experience for users, encouraging them to spend more time – and share more data – on the platform.”

“The shift will challenge influencers and marketers alike to create better and more authentic content. Rather than simply collecting Likes, they’ll need to create content that draws people in and prompts them to take further action – like actually visiting a site, sending a direct message or having a conversation.”

Removing Likes counters on Instagram was ostensibly a move designed to protect users’ mental health, deterring users from using Likes as a currency by which they measure self worth.

In April, Adam Mosseri, head of Instagram, said the test was a way to make the app a “less pressurised environment”.

“We want people to worry a little bit less about how many likes they’re getting on Instagram and spend a bit more time connecting with the people that they care about,” Mosseri said at F8, Facebook’s annual developer conference.

At F8, Mosseri also hinted at other initiatives that would aim to decrease cyberbullying, such as a feature that would ‘nudge’ users if they were about to post an ‘aggressive’ comment, CNBC reports.

Since the hidden Likes test began in the Australian market, local marketers have expressed some concern for how this will interact their view of the platform. One Twitter user noted that many marketers seeking to verify an influencer’s clout will employ an algorithm that measures Likes against followers to see if the influencer has bought fake or bot followers.

On Marketing‘s initial coverage of test in Australia, CNN commented that they would no longer be able to “verify how effective a partnership with an ‘influencer’ (or worse – a wannabe influencer) might be,” as they wouldn’t be able to validate engagement independently.

“We agree that the mental health and well-being of creators is a priority above the needs of those using publicly available data for business purposes, and should always come first,” Detch Singh, CEO and cofounder of Hypetap tells Marketing. “Creators and those who have access to their data will still be able to see likes as it serves a valuable measure in gauging content resonance with their audiences.

“The greatest commercial impact of the removal of Likes is on influencer providers that are still manually using public data for their identification and appraisal processes. While the change will come as a shock to some, it gives Hypetap more relevance in the space.”