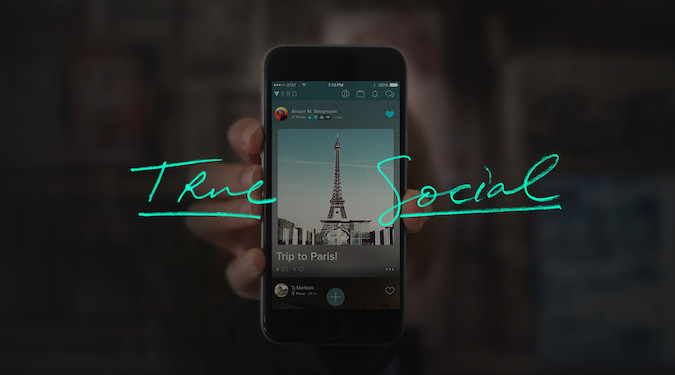 In light of recent algorithm changes at Facebook and Instagram, Vero is causing a stir. Its ad-free offering is an enticing one,  but a clunky user experience may hinder its success. Amaury Tréguer ponders whether it can take on the big guns.

Imagine a social network with not one single ad, no algorithms dictating what you should or shouldn’t see, where you feed appears in chronological order and where your privacy is respected and not used for advertising purposes. Well it exists already, and it’s called Vero.

Vero was created by billionaire Ayman Hariri, son of the former Lebanese Prime Minister Rafic Hariri, who was recently criticised for his shady past involving a now defunct construction company. Non-payment of wages was a key complaint – ironic as vero means ‘truth’ in Italian.

Vero was born after Hariri became frustrated with the user-experience and privacy policies of the world’s leading social networks. The platform positions itself as an honest and transparent social network that is advertising free. In line with Hariri’s transparency promise, Vero has published a manifesto stating its mission, privacy policy and business model. “Unlike most of our competitors, Vero’s business model isn’t based on serving advertisements. As a subscription-based service, our users are our customers, not the product we sell to advertisers.”

While we all know the majority of social platforms are made free to users thanks the power of advertising, Vero is looking at alternative revenue sources. A subscription-based model where users will have to pay a few dollars per year to access it is the route, but the amount is yet to be confirmed by Vero.

The first million users get access to Vero free for life. The platform’s webpage reveals it has recently surpassed that number and has extended the free offer “due to extraordinary demand”. In our test run we found the user experience to be pretty clunky with the odd server crash thrown in for good measure driven by the rush on downloads. Bad reviews are now surfacing – two stars in the iOS App Store and 2.5 stars on Google Play. Ouch!

Despite the clunkiness, the experience is pretty unique. While most social platforms are offering a clean white background, Vero exudes night shift mode. It’s all dark and glossy. The feed is blank until you start following or connecting with people – you don’t see any ‘suggested posts’ as you would with other social networks.

Users are able to categorise their network into four main buckets: close friends, friends, acquaintances or just followers – so users are in total control of what they want to post and to whom. It recognises that you don’t necessarily want to share your family photos with your wider network, just your close friends.

There’s no simple text-based status options – just rich media like photos, videos, music. You can also recommend TV series, movies and books and link them directly to the appropriate app store (iOS or Google Play) allowing others purchase them in just a few steps. This is where Vero is also likely to cash in – with commission on the Vero ‘buy now’ feature. Similar to WeChat, Vero is aiming to become a one-stop shop where you will be able to do all the usual things that social networks offer as well as buy items without leaving the app.

Interestingly, Vero isn’t new, it was launched a few years ago and only managed to secure the world’s attention in light of the recent algorithm changes from Facebook and Instagram. There’s a growing backlash against the traditional social channels so the timing is right for Vero. Celebrities including Zack Snyder, the director of Justice League, the forthcoming superhero movie, influencers and even publishers like British GQ and French Paris Match magazine are jumping on board and starting to promote their handles on other traditional digital platforms. Interestingly, the hashtag #Vero has been used more than half a million times on Instagram, with users mainly sharing screenshots of their profile and prompting their followers to join the party. At the same time, in-line with the criticism around the founder’s past, the #DeleteVero movement is starting to gather momentum on social – so far it received 260 mentions on Instagram.

It’s hard to predict what is going to happen with the app but if the Vero wave continues to rise, the big challenge for brands will be to stand out and amass followers organically. Creating compelling content and exclusive offers (freebies, discounts etc.) will likely be the key to getting noticed.

Regardless of the mixed feelings around Vero and its founder, we like the idea of an ad-free social network. Ello tried a few years ago but unfortunately plunged after a few months. Going after the big guys – Facebook, Instagram, Twitter or Pinterest is not an easy thing to do and you need to be ready to handle negative backlash to survive!

Previous Article
LinkedIn director of marketing solutions on why Australian marketers are lagging in new tech adoption
Next Article
Could Brand USA’s 3D audio campaign changes the way we listen to ads?