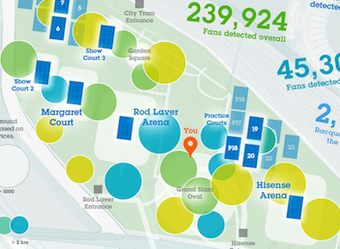 This year IBM’s main technology innovations for the Australian Open website and mobile and tablet apps have focused around visualisation; translating complicated data into easily-digested and useful information for fans.

“Data in itself is quite boring – it’s about what you do with that data.”

The company’s 22-year partnership with the tennis tournament has come a long way since its 1996 debut building the first Australian Open website.

Viewable on all devices, CrowdTracker shows a real-time visualisation of how the crowd of up to 640,000 is distributed across the event space.

Wong explained that the data is collected by Wi-Fi routers that pick up fans’ mobile phones from their location on the ground.

On top of adding real value to fans’ experience at the event, allowing them to plan their days to avoid the crowds, Mahir explained that the CrowdTracker data will also prove particularly valuable to event organisers.

“One of the business drivers for building the applications was to help us know what’s happening within the precinct. Melbourne Park is going through a huge redevelopment project this year and last year, and we’ve made a lot of changes to the site and layout,” Mahir said.

“[With CrowdTracker] we get a sense of the areas that are interesting and a sense of our customers. Analytics combined with the user interface allows not only appeal to use the application but also for us to grab some intelligence to help us improve year after year.”

The CrowdTracker feature also includes a social leaderboard section, which shows the hotspots for posting pictures to Instagram and highlights ‘selfie zones’ around the event area.

“The Australian Open is very much a social event; it’s not only about the matches that you watch but the excitement. So we’re picking up where people are posting to Instagram and we rotate the pics that have been uploaded,” Wong explained.

Mahir added: “Fan engagement is important to any sporting event. We’ve designed something that’s very user-friendly and engaging, but at the same time it gives us some very important information about sentiment – are they talking in a positive or negative sense? We have a dedicated social media team that tracks what’s happening.”

SlamTracker gets a user-centric redesign

“SlamTracker last year was very statistically-driven,” Wong said, explaining how the redesigned match statistics section of the website and app has a much cleaner look and feel in 2015.

The redesigned SlamTracker features point-by-point data visualisations, commentary and statistics that include new data on player and ball movements.

Slamtracker also features a ‘Keys to the match’ section, three pieces of insights explaining what each player in a match needs to do in order to win the match.

The information is based on eight years of history of that player (or an approximation based on a player with a similar playing profile).

The feature has proven a 98% accuracy rate; when those keys are achieved, that player most often wins the game. The ‘Keys to the match’ go live online the second the players step foot onto the court.

Operations supervisors throughout the event are trialling the use of a dashboard that keeps track of all kind of information from crowd distribution to merchandise and food and beverage stocks in certain areas.

The dashboard makes information available to staff in real-time, and even gives them advice on what actions to take:

“It says, for instance, ‘There are long queues at Rod Laver Arena, you may want to set up some extra ticket scanning stations, deploy more staff, activate social media to inform the public,” Wong explained.

IBM’s super-computer Watson is again working within the Tennis Australia team this year, acting as a ‘hands-off manager’, as Mahir describes it, aiding in dynamic provisioning of computer power.

“The Watson technology has been used already to help us manage our infrastructure, but what’s interesting this year is it’s another layer of intelligence that can override certain decisions made by predictive analytics,” he said.

Watson will prove particularly helpful in assisting the event’s IT team to provision appropriate amounts of cloud-based server power to handle traffic to its online assets.

Tennis Australia provides IBM with structured data including match times, players involved and the popularity of those players, but occasionally traffic spikes unpredictably.

This year, Watson will be on hand to read that social buzz; the unstructured data of what people are posting online, and to make a call on whether capacity needs increasing.