A multidisciplinary collaboration between the University of Sydney, the Aboriginal Drug and Alcohol Council and digital agency Nest is building an iPad app using human-centred design principles that, for the first time in decades, will produce accurate and reliable data that can be used to inform policy and community efforts to tackle alcohol and drug abuse.

Kate Conigrave is conjoint professor at University of Sydney and a specialist in addiction medicine. The work of Conigrave and her team puts her in touch with many frontline drug and alcohol workers, including Scott Wilson, director of the Aboriginal Drug and Alcohol Council (ADAC) in South Australia. Wilson has first-hand experience. He’s an Aboriginal man from the Stolen Generation, and has a background of drug use.

To secure funding for their services, organisations like ADAC face a constant battle of submission-writing to the government. The bigger problem, however, is that the best research – by a long way – ever conducted into what Aboriginal and Torres Strait Islander people drink was a one-off Indigenous supplement to the National Drug Strategy Household Survey conducted in 1994.

For a whole variety of reasons – lack of depth, methodology, sample selection – most data on the issue generated in the intervening decades is woefully inaccurate.

What that means, astonishingly and to the detriment of health policy, is that it’s impossible to tell if any intervention programs ever conducted have been effective. There is no benchmark.

“20 years later, everyone still uses that data,” Wilson says. “How are you to know if something works or doesn’t work?”

While Wilson was undertaking post-graduate studies at the University of Sydney with Conigrave, conversations on the problem eventually led to the recruitment of digital agency Nest to build an app that frontline support service staff could use to collect data in a valid and reliable way. It’s called The Grog Survey App and is about to enter its first real-world trial phase.

By being an ongoing supplement to the existing work of frontline staff, the app avoids the main reason that reliable and valid data has only been collected once: the cost of undertaking a research project large enough to get a statistically-significant representative sample.

Indeed, surveys of Aboriginal and Torres Strait Islander people hit methodological problems that white society may not think about.

“The National Drug Strategy Household Survey is usually a phone survey,” says Wilson. “The people we deal with are less likely to have stable accommodation, and therefore they’re less likely to be at the end of a phone waiting for somebody to ring them up to do a survey.

“So you wouldn’t be capturing those people who are the heavy drinkers, or even people who might not necessarily be the ones you see out in the streets, but are still drinking at high levels.”

Even if a phone survey could connect researchers to the right people, there’s still no guarantee of good data, Wilson says. People don’t know how the information will be used, so lying is inevitable. Vague language like ‘a couple of drinks’ can mean anything from two upward, and that’s at the more trivial end of the scale of deception.

“The idea behind the app is about self reporting with more privacy,” Wilson says. “You can give someone the iPad and a set of headphones. It’s in their own language and they’re the only ones hearing it. There’s more confidentiality, so we think people will be more accurate in recording, because they’re not responding to someone else asking them.” 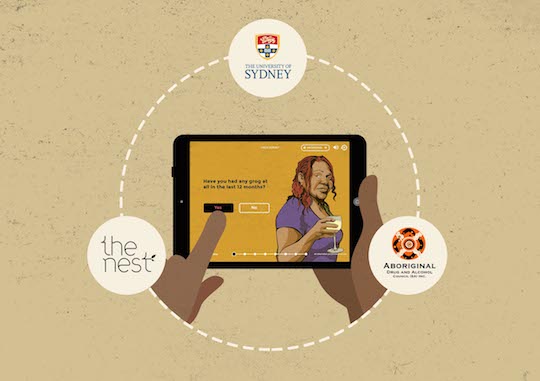 The app is also very visual, and necessarily so. “Some remote communities don’t even have the same number counting system,” says Conigrave. “They say ‘one, two, many’. When you calculate what you drink into standard drinks, it doesn’t fit culturally at all.”

Wilson expands: “A lot of folk, especially when they’re out drinking in the areas that we come across people, are not sitting there drinking out of nice wine glasses, or schooners, or whatever. The’ll drink out of whatever container they might have in the vicinity. It could be a Coke bottle, or an old coffee mug.That’s what gets filled up,” he says.

So the project of developing The Grog Survey App set out to solve a lot of the big methodological problems that don’t work with this target audience. (In fact, as Wilson points out, they don’t work with most people. )

Martin Hoegh-Guldberg is head of digital at Nest, and has 20 years of experience in creating insightful, simple and innovative digital experiences.

He says that throughout the development process the team went to great lengths to collaborate with academia, front line services and potential end users. 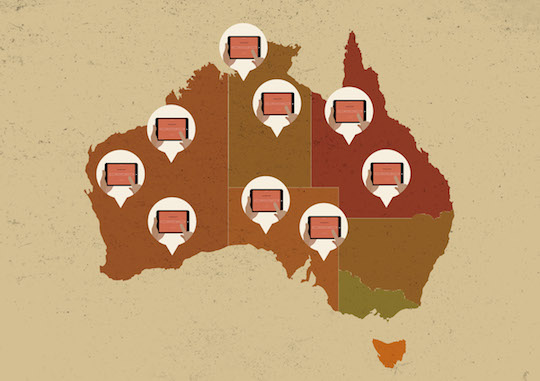 “Prototypes are reviewed from the Aboriginal community point of view and the academic point of view, which I think is quite unique,” Hoegh-Guldberg says. “Normally what would happen is we’d wander off and design something and bring it back. Now we’ve got this refined process where everybody’s contributing to the user experience, the wireframing, how Aboriginal people should be portrayed in imagery, and so on.

“I think the end result will be that it will be highly usable.”

From a technical point of view, it’s an iPad app to be taken into the field to the communities where the data’s captured. It connects back to a university server where researchers can look at it.

Another unique consideration is that the front-line researchers must be able to administer the survey with no internet connection. The data can still be collected and synchronises with the server once a wi-fi connection is re-established on returning to their hotel or the airport.

“The university and the ADAC guys can actually start to manage and see where they’re getting the right mix of male/female, heavy/light/medium drinking parts of the community,” Hoegh-Guldberg explains.

After enough of the right data is collected and analysed, the idea is that the insights generated will be closer to the truth than any produced for decades and, hopefully, will go a long way towards remedying the misinformation that circulates, given that the welfare of Aboriginal and Torres Strait Islander people is politicised at all levels of government.

“You’ve probably heard about the welfare card being brought in because all of these Aboriginal people are spending their money on alcohol,” Wilson says. “In actual fact, if you look at it, yes, some people are, but the vast majority tend to spend their money more wisely.

“Ceduna, which is where we’re going to be trialling the app, is now part of that welfare card program. Everybody on a Centrelink payment is treated the same, where 80% of their payments are now quarantined.” 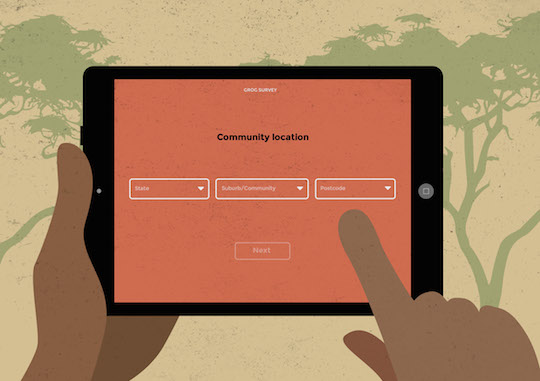 Conigrave says the better data actually shows that more Aboriginal people are currently non-drinkers than the rest of the population. “Governments don’t have accurate information to base [action] on,” she says. “Agencies like ADAC and my clinical agency want to provide treatment, and we want to be involved in prevention. No one is denying that there are some individuals with problems, and some communities with more than their fair share of problems, but you need to be informed.

It’s self reporting, but it’s been designed in collaboration with Aboriginal people, so it can be interpreted the right way. That’s really tricky.”

It’s a human-centred design approach, so it must start with empathy.

Wilson’s been involved in a lot of research projects. “Normally the researchers go off and do something. You might see a draft report, make comment and then ‘bang’, it’s published.

“With this project, I get daily emails through Basecamp and we have regular face-to-face meetings. At every step we’ve sat down with the guys, we’ve gone through the latest work and, well before it goes into production, we’ve been able to say, ‘Look, can we change this? Can we do that?’”

The human-centred design approach has been critical to the project, says Hoegh-Guldberg, especially with so many stakeholders with differing areas of expertise and with varied requirements.

First, the app must provide an approach that’s totally acceptable, accessible and comfortable for Aboriginal people to use,” Conigrave says. “Whether they’re an Aboriginal lawyer in the city, or a remote Aboriginal person that doesn’t speak English or doesn’t have a traditional counting system. Or indeed if they’re a homeless person, in the long grass in Darwin, we want something that’ll be comfortable for all of them,” she says. 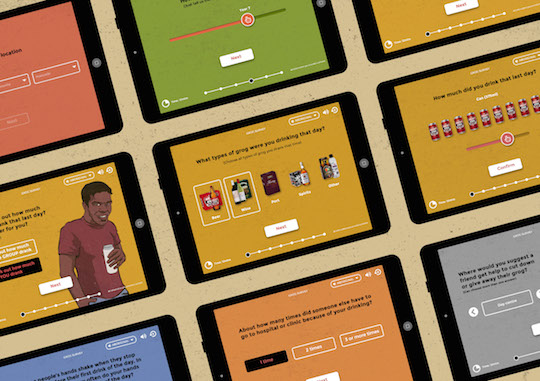 “Second, we need something that’ll give us academically rigorous data. We’ve got funding from the National Health and Medical Research Council to test it and validate it, so we’re going to compare how it performs compared to a clinical interview.

“Then, after we’ve tested it and refined it, we’ll go out and use it in a survey setting. If you’re out in the field and you want to interview someone in a boarding house or in a prison, or if you want to go into a shopping centre, we want something really portable and easy for research assistants in any part of the country to use.

The end goal is the collection of valid, reliable data that can be used to inform government policy and community efforts to tackle alcohol and drug abuse.

“I think if we do this well, this project could transform the way that this type of data is collected in national health surveys,” Conigrave says. “Historically, there has been a huge problem collecting data in Aboriginal settings. Governments churn out guidelines for safe drinking, but it’s given out in standard drinks. I think our learnings from this project will prompt us to rethink the way we communicate about alcohol.”