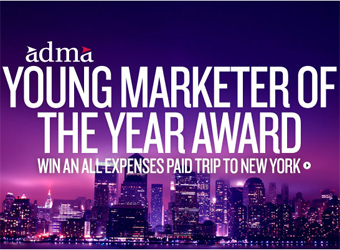 Seven young marketing and ad executives in senior directorship positions emerged as victors in ADMA’s Young Marketer and Young Creative of the Year 2012 awards, reflecting the lowering age of the industry’s power base.

Four art directors, a marketing director, managing partner and managing director, all under the age of 30, topped the field in their respective States at the awards presented to close last week’s 2012 ADMA Forum.

With digital skills now crucial to marketing and advertising roles, increasing numbers of Gen Y execs are nudging Gen X peers out of the way as baby boomers start to retire, a phenomenon dubbed the ‘Prince Charles Sydrome‘.

Rebranded as the Association for Data-driven Marketing & Advertising during the conference, ADMA launched the awards this year as part of its 30Below community to recognise and support up-and-coming talent in the Australian marketing and advertising industry. The national winners of the two awards win a trip to New York to meet with leading marketers at Google Creative Lab, OgilvyOne Worldwide and Anomaly, among others.

CEO of ADMA, Jodie Sangster, said the pool of young talent in Australia was so strong that for some states it was impossible to choose just one winner.  “Young Creative was a tough category… in New South Wales our judges have awarded State Finalist Young Creative to both Leisa Ilander, OgilvyOne and Damon Porter, a freelancer.”

No Young Creative of The Year title was awarded in Tasmania or South Australia.

Dual winners were also awarded for Young Marketer of the Year in South Australia, with Phil Sandford, Tourism SA, and Haylie Craig, Hungry Creatives both moving on to the national finals.

Young Marketer of the Year is judged based on career achievements to date, while Young Creative of the Year entrants were tasked with developing a campaign concept for 2013 to demonstrate their creative talent. The overall winners will be announced on November 1 at the ADMA Awards, with the winning campaign to be rolled out nationally in 2013.