More than 6.7 million Australians are expected to tune into to this year’s Australian Open, delivering major sponsor Kia the eyeballs of almost a million new car intenders.

While new data from Roy Morgan Research suggests that only one in seven Australians associate the Korean automaker with the event, that figure is more than double for new car intenders, and five times higher for Kia intenders.

Kia will be heavily featured throughout the event, with Roy Morgan’s research expecting the brand will get in front of almost a million new car intenders as a result of its sponsorship of the tournament.

Only the Olympics, Commonwealth Games and AFL Grand Final traditionally receive more TV viewers, giving the Australian Open wider reach than the NRL Grand Final, cricket and the Melbourne Cup. Kia has been the major sponsor of the Australian Open since replacing Ford in 2002, spending a speculated $10 million per year in cash and loaned vehicles.

Proportion of each group who associate Kia with the Australian Open: 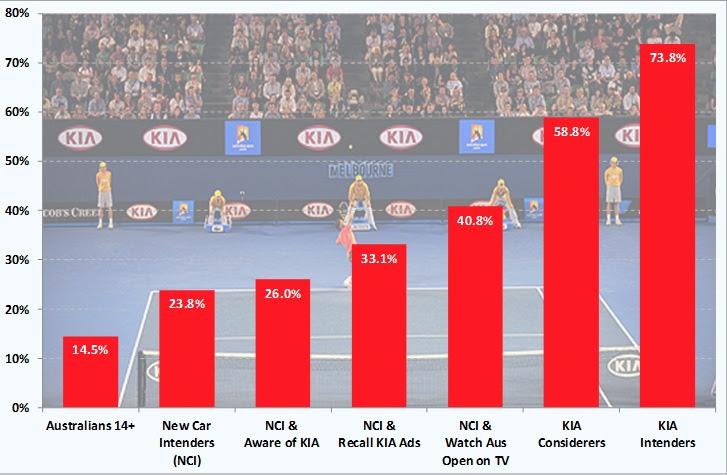 “When it comes to association with the Australian Open, Kia is the only brand to hit double figures, with Adidas and Nike the next most often associated brands. Although neither sports brand is a ‘direct’ event sponsor, their logos appear on most centre-court (and televised) players including Roger Federer, Rafael Nadal and Andy Murray.

“The five-fold boost between the proportion of all Aussies who associate Kia with the event and the proportion of Kia new car intenders suggests the carmaker is doing an excellent job at leveraging their involvement with prospective buyers.