‘Everything is NOT awesome’: Greenpeace attacks Shell through Lego brand partnership

‘Everything is NOT awesome’: Greenpeace attacks Shell through Lego brand partnership

Greenpeace has launched an attack on Lego urging it to end a partnership with Shell that it claims is inappropriately brainwashing kids into brand loyalty.

The global lobby group’s latest campaign targets a toy branding partnership between Lego and Shell in attempt to influence the oil company’s activities in the Arctic.

Greenpeace’s campaign started with a series of Lego characters staging mini-protests around the UK holding banners saying ‘Save the Arctic’ and ‘block Shell’. The photo below was taken by Greenpeace of a Lego protest at Legoland in the UK. 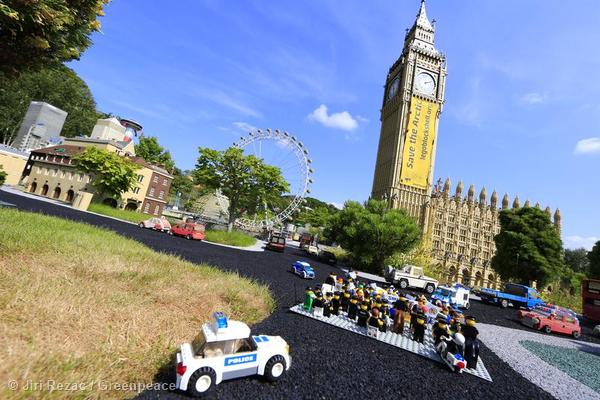 The organisation then released this video featuring a slow version of The Lego Movie theme song:

A petition website set up by Greenpeace claims to so far have 280,500 signatures.

Greenpeace’s campaign report, ‘Lego is Keeping Bad Company’ urges Lego to cease its partnership with Shell in protest against its activities in the Arctic:

“Shell is now hunting for more oil in one of the world’s last remaining pristine regions: the Arctic. Sea ice in the the far north is melting, but rather than see this as a warning sign, Shell sees it as an opportunity to drill for more of the oil that caused the melt in the first place.”

Lego entered into a long-term contract with Shell in 2011, which included creating a promotional line of car toys branded with Shell and Ferrari to sell in its petrol stations around the world, including in Australia.

This video explains the details of the project:

SHELL LEGO from irisworldwide on Vimeo.

Greenpeace is arguing that Lego is acting unethically by promoting Shell to its young, impressionable customers.

“By placing its logo in the hands of millions of children, Shell is building brand loyalty with the next generation of consumers, voters, business leaders, shareholders and politicians. Just as Shell lobbies today’s decision-makers to win approval for its Arctic drilling, it’s also securing support from the next generation of movers and shakers who will ultimately have the final say over Shell’s future,” the Greenpeace report says.

“Research shows that if you secure brand loyalty when children are young, that positive glow lasts into adulthood. Brand loyal customers are less likely to notice changes in a product or think critically and independently about a company’s ethics.”

Lego president Jørgen Vig Knudstorp said in a statement that the matter should be handled between Shell and Greenpeace:

“We are saddened when the Lego brand is used as a tool in any dispute between organisations. We expect that Shell lives up to their responsibilities wherever they operate and take appropriate action to any potential claims should this not be the case. I would like to clarify that we intend to live up to the long term contract with Shell, which we entered into in 2011.

“A co-promotion contract like the one with Shell is one of many ways we are able to bring Lego bricks into the hands of more children.”

The Australian operations of Shell had not returned Marketing‘s requests for comment at time of publishing.