Heineken launches mid-strength brand extension – its first ever in Australia

Heineken launches mid-strength brand extension – its first ever in Australia

Heineken has unveiled a low-calorie and low-carbohydrate brand extension, dubbed Heineken 3, in a push to appeal to more Australians and more usage occasions.

Heineken today announced the launch of Heineken 3, signalling the start of the first phase of an 18-month campaign. It’s the brand’s first ever brand extension in Australia and its biggest ever marketing campaign here, and aims squarely at growing its potential customer base, particularly among women, as well as drinking occasions.

The product launch is the first that Heineken has released in Australia since Heineken first arrived. It will be supported by a high-impact nationwide campaign with the aim of establishing the brand into the Australian market and drive trials for consumers. Australia will also be the first market globally to launch the Heineken 3 brand.

Heineken says the launch seeks to capitalise on the growing demand for premium mid-strength beer, with the company identifying huge growth potential among occasional beer drinkers in Australia.

The company says it has analysed data and insights from Australian consumers to identify opportunities to leverage spontaneous, easy-drinking, mid-energy and mid-afternoon consumption occasions. This will form a major part of Heineken strategy to enable the brand to access more drinkers in more occasions.

The creative platform supporting the brand extension is ‘Have It All’. Heineken says this is communicated through the product’s three key attributes: lower calories, lower carbohydrates and “an award-winning great taste”.

Heineken 3 has 86 calories per bottle, five grams of carbohydrates and 3.3% ABV. The latter claim is supported by success at the World Beer Championships as best Lower Calorie lager in 2013 and 2014 and a Gold Medal at the 2015 European Beer Star Awards for best German Style Liechtbier.

Heineken says the product has proved extremely popular in early consumer trials in Australia. Heineken believes this will provide a platform to grow the premium mid-strength category in the coming months and leverage ongoing consumer trends around premiumisation and moderation. Furthermore, it’s expected Heineken 3 will be an opportunity to recruit more female consumers, particularly among those who want an easier drinking and lower-calorie lager. 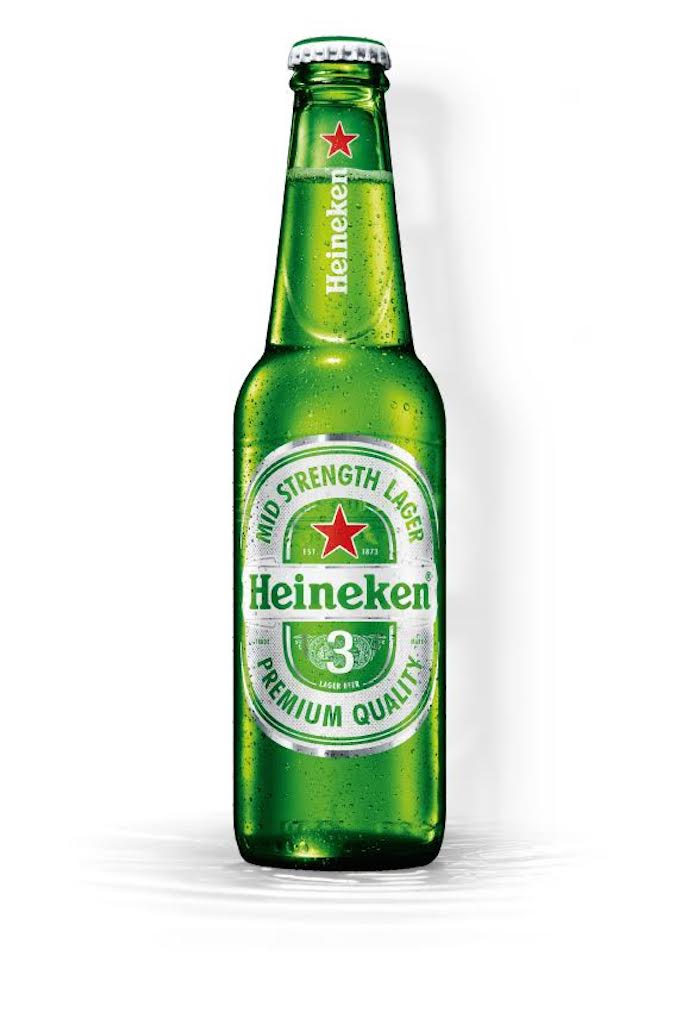 “We have big plans for the Heineken 3 brand here in Australia and this is supported by the significant investment we have put behind our launch and marketing campaign,” says Andrew Campbell, managing director at Heineken Lion Australia. “We believe it will shake up the market with its compelling offering, quality and great taste. Consumers want brands and products that complement their modern, active and spontaneous lifestyles without compromising on taste or quality. This is exactly what consumers can expect from Heineken 3, a great tasting lower calorie beer brewed to the same world famous quality and standards as Heineken.”

The marketing campaign will be led by PR and experiential activity, with a launch held in Sydney to coincide with its debut on to shelves in retail stores and in bars across Australia. The launch event enabled Australians to embrace the Heineken 3 philosophy of ‘having it all’ by creating an iconic Australian summer experience in the last week of winter over a two-day launch party.

Social, digital, outdoor, retail and experiential activations will heavily feature throughout the campaign, with the primary target being inner city consumers. Heineken will introduce a number of pack sizes to retail stores including regular six and 24 packs along with a new 12 pack, to answer the necessity of smaller and more convenient formats which play a role in more occasions.

“In Australia, Heineken has a reputation for delivering innovative and impactful campaigns to market. With Heineken 3, we are continuing to deliver on this through product innovation and providing engaging experiences that build awareness and encourage trial in a responsible way. This is in line with our global commitment to promoting moderate drinking and encouraging consumers to enjoy Heineken responsibly,” Campbell says.