In Australian media news this week, Nine and Fairfax are reportedly planning a video streaming service together, the launch of Catablog, a new bloggers directory, the commercial radio awards finalists are announced, The Economist posts a bizarre reader letter and EMMA turns one.

Nine and Fairfax to start joint venture in video streaming

Nine Entertainment Co and Fairfax Media are set to join forces in video streaming with a $100 million partnership.

The Sydney Morning Herald has reported that the yet-to-be-finalised deal would involve each company investing $50 million into Nine’s planned video-on-demand service, Stream Co.

The companies are expected to announce the joint venture in the coming weeks after more than three months of negotiations, according to The Sydney Morning Herald.

The Australian is reporting that Fairfax Media plans to buy a strategic stake in Nine Entertainment Co in order to gain a seat on the company’s board.

The two companies could undergo a $4 billion merger if regulations change, The Australian has speculated. Currently, Fairfax is prevented by law from owning more than 15% of Nine.

Catablog – a new database of bloggers to help brands

Catablog says brands can save time and money by identifying influential bloggers by area of interest, viewing their rankings and instantly connecting.

A growing list of 2000 qualified blogs is currently in the system, listed by category and ranked based on social audience and reach.

Long says the blogs will be ranked in real-time every day.

“Being part of this directory will mean that PR companies and brands across Australia and New Zealand will be able to contact relevant bloggers when they next plan a campaign or launch a product in their field of interest.”

The following radio favourites will battle for the title of ‘Metropolitan Best On-Air Team FM’:

Competing for the title of ‘Metropolitan Best On-Air Team AM’ will be:

Nominees from country, provincial and non-metro radio stations make up a total of 175 ACRAs finalists.

Just what the doctor ordered: a magazine subscription cancellation

The Economist has published to its Instagram account an absurd letter from a reader who claims to have experienced health benefits from cancelling his subscription with the magazine.

The brand’s Instagram post unsurprisingly included a disclaimer recommending against subscription cancellation, at least without doctor’s orders. Here’s what the man wrote on 13 August 2014:

I normally read the print edition of your newspaper in my smallest room. This summer I foolishly failed to update my subscription in good time and missed two editions before renewing. As a result of shorter bathroom visits, through boredom, my haemorrhoids disappeared. It is with mixed feelings that I have to inform you that, thanks to your excellent coverage of the seemingly on-going collapse of Iraq, the ‘Islamic State’ have proved to be a pain in the rear end in more ways than one. 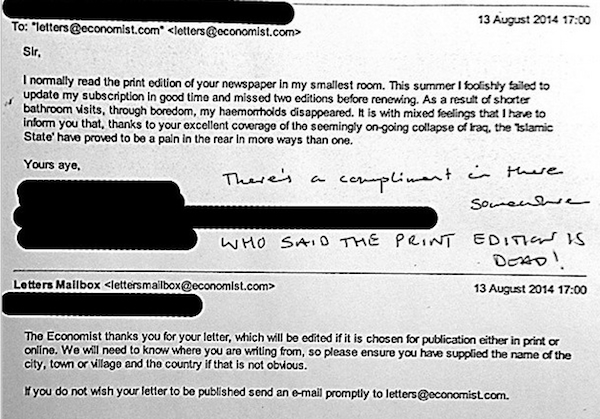