Yahoo7’s first-ever live streaming of the Melbourne Cup on its Plus7 app this week set a new Australian record with 488,000 live streams throughout the day.

More than 300,000 people watched the main race via mobile or desktop devices.

“Based on stats on concurrent users and peak traffic, yesterday’s live stream of the Melbourne Cup on Channel 7 was likely the largest online event of its kind in Australia,” says David Habben, chief media strategist for Akamai Technologies in Asia Pacific.

“To put that into perspective, the audience of over 300,000 was more than three times larger than the Australian live stream of the FIFA World Cup, and almost double the peak traffic.”

This week’s Melbourne Cup was the fifth most talked about sporting event of the year, recording 7.7 million tweet impressions, according to Nielsen Twitter TV Rating.

Tweet volume peaked at 3.30pm, about 25 minutes after the race. 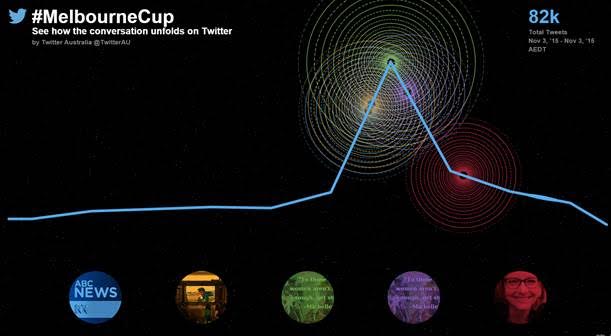 Out-of-home (OOH) industry revenue increased 19.4% year-on-year for the month of October to $69.9 million, according to the Outdoor Media Association (OMA).

OOH audiences have grown for the fifth year in a row, according to the annual update from MOVE (Measurement of Outdoor Visibility and Exposure).

Audiences have grown by 3.4% this year across all mainland capital cities, to an average of 300,000 people in OOH environments each day.

The company says the heart will be “easier and more rewarding” for users: “not everything can be your favourite, but you might like a lot of things”.

Foxtel plans to acquire up to 15% of Network Ten, while Ten plans to acquire a 24.99% stake in Foxtel’s advertising agency MCN (Multi-Channel Network) and 10% of Presto (a joint venture between Foxtel and the Seven Network).

The ACCC has announced it will not oppose the proposed acquisitions.

The magazine is based on the blog by Australian photographer and mother of two Kate Berry, who will serve as editor.

Programmes to run on the network will include Curtis Stone’s Beach Eats USA, Kitchen Inferno and Surfing the Menu; Rachael Ray’s 30 Minute Meals and Giada at Home; and food-inspired travel and culinary adventure programs Reza: Spice Prince of Vietnam, Bizarre Foods with Andrew Zimmern and Diners, and Drive Ins & Dives.