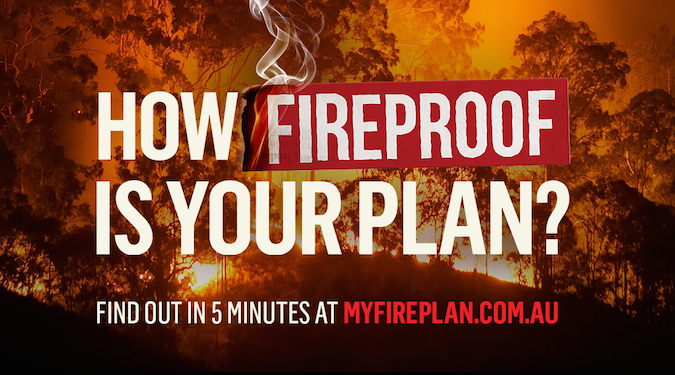 NSW Rural Fire Service has taken a solemn stance on fire protection plans for its campaign in the lead-up to this year’s bushfire season.

The ‘How Fireproof is Your Plan?’ campaign via J Walter Thompson launches this week over television, cinema, OOH, digital, microsite and other community engagement assets. The campaign dramatises a series of situations where families have been forced to action insufficient bushfire preparations.

In 15, 30, 60 and 75 second lengths, the spot sees several families rushing to escape their homes devastated by bushfire, confronted with the lack of detail in their bushfire preparation.

“We know that while 69% of people in bushfire-prone areas have some form of plan, it’s critical they deepen its quality to improve their chances of survival,” explains J Walter Thompson ECD Simon Langley.

“Our strategy therefore focuses on the need for self-reflection regarding what is, and what is not a viable plan in the face of a bushfire.”

The campaign aims to drive residents living in fire-prone areas to its microsite, where those at risk can review and revive their bushfire revival plans.

“We were excited to work with J Walter Thompson on this project. Their strategic and creative thinking has brought to life a powerful idea that will help increase the quality of bushfire planning and preparation,” says Anthony Clark, director corporate communications for NSW RFS (Rural Fire Services).

‘How Fireproof is Your Plan?’ is the J Walter Thompson’s third campaign for NSW RFS, with previous campaigns such as ‘Planning to Make a Plan is Not a Plan’ (2012) and ‘I Am Fire’ (2015).