Animals Australia’s emotive campaign featuring a pig singing ‘Somewhere’ from West Side Story affected more than 260,000 people to pledge against factory farmed products online, and 24,000 people per month to avoid buying them.

Australia has the second highest consumption of meat per capita globally, consuming an average of 111.5 kilograms of meat each year. Concentrated Animal Feeding Operations (CAFOs or ‘factory farming’) have become increasingly prominent in order to meet a rising demand for meat.

2. Australia’s consumers were green-washed and blissfully unaware of the cruelty that is factory farming

The chicken and pork industries were worth a combined $7.6 billion during the life of the campaign. From 2012 to 2014, Australian Pork Limited spent an average of $7.4 million to ‘build consumer demand’ for pork alone. Additionally, chicken brands such as Lilydale and Steggles also promoted their products with big budgets. Having such significant resources

at their disposal enabled these industry bodies, organisations and brands to greenwash themselves, thus appearing more natural and compassionate as they actually were.

3. Australia’s hunger to save on living expenses

Australia’s two major retailers, Coles and Woolworths, have a market share of 72.5% of the $82 billion grocery sector. Both have been spending millions on blasting retail campaigns such as ‘Down Down’ or ‘Cheap Cheap’ ads on the airwaves for the last few years. Both have vested interests to discount everyday shopping items on the shopping list, which in turn creates a fertile ground for cruel animal farming techniques and practices.

To sum up the challenge, we had to galvanise green-washed and blissfully unaware Australians to step up against a multibillion-dollar industry by pledging to stop farm animal cruelty while spending their hard-earned cash on premium priced, more ethical products during economic tough times. Our objectives for ‘Make It Possible’ were:

In the past, Animals Australia focused more heavily on influencing legislative change, while convincing industries and governments

of the need to move on animal welfare issues. While in theory it’s reasonable to expect that laws to protect animals would then influence industry practices, which would go on to influence businesses to meet community expectations, sadly, the opposite is true.

Australia has one of the highest rates of pet ownership in the world. About 63% of Australian households own pets. There are an estimated 33 million pets in Australia. That means 10 million more pets than there are Australians. Needless to say, we are opposed to animal cruelty, and don’t like seeing animals suffer.

3. Australians have a happy-go lucky attitude

Australians are among the most optimistic people in the world, research reveals. Being optimistic means we inherently believe that we can change lives for the better.

The above three insights led to the creative task at hand:

And so the ‘Make It Possible’ campaign was born.

The ‘Make It Possible’ campaign heroes a hopeful pig supported by other pigs and chickens. Together they are singing ‘Somewhere’, a song from West Side Story – the quintessential ode for a better, brighter, less harmful future.

To juxtapose the lyrics of hope, we see covert, heart breaking and 100% real footage from factory farms that demonstrate the cruel conditions our beloved pigs and chickens are experiencing.

At the end, our hopeful pig grows wings and escapes its cruel environment. The super on screen says, “Imagine a world without factory farming”. The call to action is a website: Makeitpossible.com.

The donation-funded film directed people to the campaign website, which acted as a hub for social change. On the website, people could watch the film in long-format, pledge their allegiance by signing a petition, share their pledge with their social network and donate to our cause.

Being on television enabled us to reach people when they were at home eating dinner in front of the television, giving the issue relevance and cultural potency.

Social media played an important, cost-effective, role in helping Animals Australia to stay in touch with consumers on a broad scale and continue the dialogue with fresh and relevant content.

Outdoor, radio and print media, donated by key media owners, extended our reach and frequency while driving traffic to the ‘Make It Possible’ website, where people could commit to changing their purchasing behaviour.

264,527 people went out of their way to take the ‘Make It Possible’ pledge on the website by refusing factory farmed products. That’s a 20% conversion rate per visit.

Following the launch of ‘Make It Possible’, in 2013 Woolworths committed to phase out its use of caged eggs completely in response to “growing consumer demand to address animal welfare”. As a part of the shift, caged eggs would no longer be used in the entire Woolworths Private Label ‘Select’ range.

Coles has developed a partnership with the RSPCA (Royal Society for the Prevention of Cruelty to Animals) to produce products that ensure animals a better standard of living as a direct result of the consumer backlash engineered by the ‘Make It Possible’ campaign.

The drop in demand did not only apply to factory-farmed eggs and chicken products. In 2011, only 61% of Woolworths stores stocked free-range pork. By the end of 2014, it had extended these options to all of its stores.

This shift did not only apply to supermarkets. McDonald’s Australia committed to phasing out cage eggs by the end of 2017, following sustained pressure from the community led by Animals Australia.

And people matter to the Government, too.

In 2014, the ACT became the first Australian state or territory to legislate a ban on factory farming. The Tasmanian Parliament has foreshadowed similar sentiments. These legislative changes reflect the ultimate success that one hopeful soul can change everything.

Even if it is a singing pig. 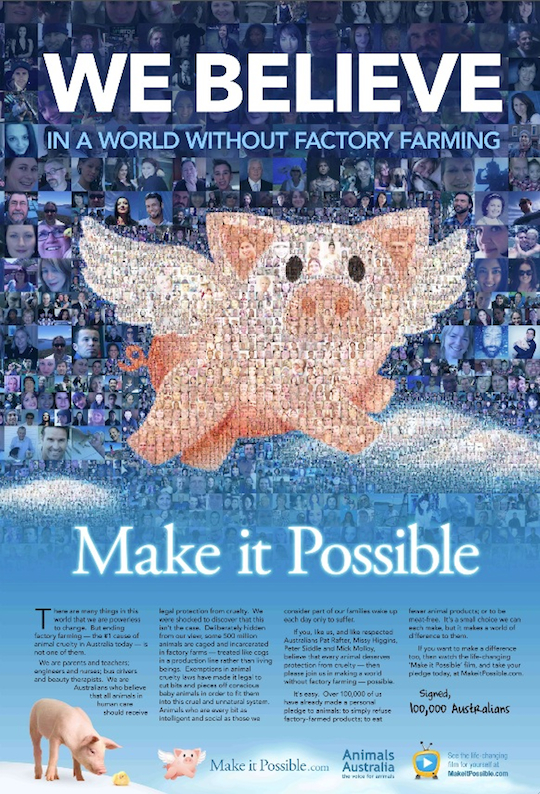