The study of 7,000 Australian shoppers identified the innovations at the top of shopping lists as products which save time, simplify life, are perceived to be of good value or bring a little luxury into people’s lives.

Product of the Year director, Sarah Connelly, says most of the 28 winners reflected the time pressure people are under and the desire to find new products to make lives simpler and better.

“Consumers are looking for good value, with supermarket home brands scoring two awards this year, but there’s still room for little luxuries even though purses are being squeezed,” Connelly says.

“A number of category winners are not the cheapest options, but clearly shoppers think they are worth paying that little bit extra for.”

Private label products entered the awards this year amid consumer backlash over their increasing domination of supermarket shelves. Coles took out the fresh food category with its Coles Grill range of seasoned barbecue meat cuts and Woolworths topped the snack vote count with its Woolworths Select Deli Style Chips.

A stand-out among the entrants was Listerine Zero which scored best in class in both Australia and the US as the first alcohol-free mouth freshener, indicating the intense taste of traditional offerings is a deterrent to their uptake.

The research also found eight in 10 (83%) household shoppers have bought goods and services over the internet in the past 12 months, with CDs, DVDs and books being the most popular purchases, followed by tickets to movies, shows and concerts and clothes.

The full list of winners for 2012’s awards were: 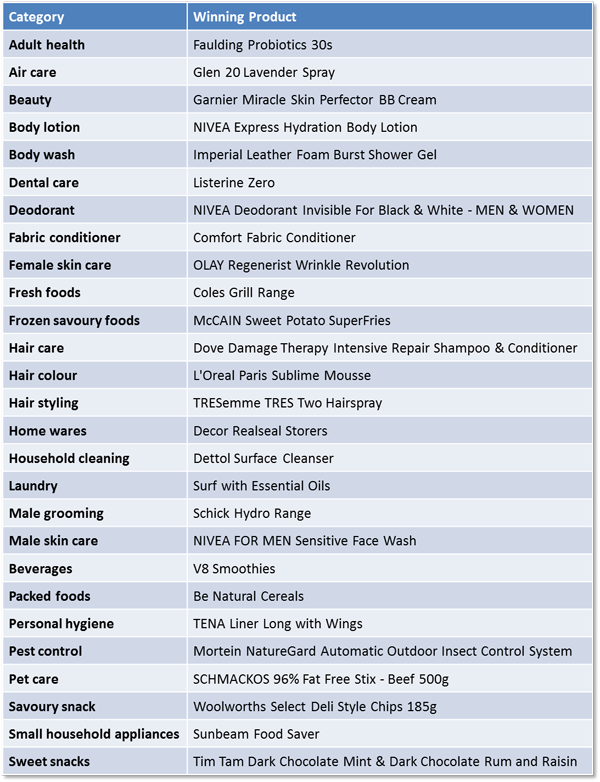