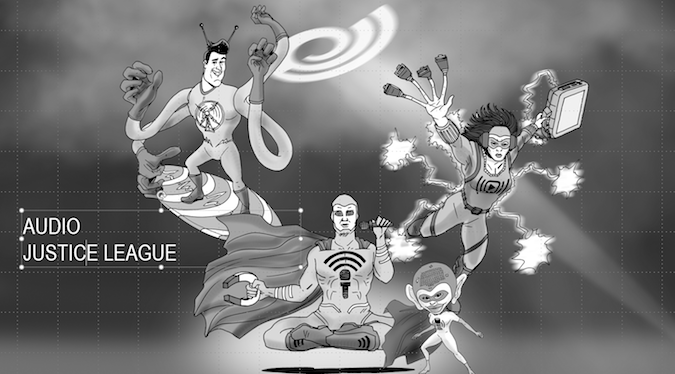 Gai Le Roy shares an entertaining wrap of the IAB Audio Summit in Sydney, introducing the audio advertising superheroes that make up the Audio Justice League.

We’ve all heard of the Marvel Universe filled with its exceptional collection of superheroes. But I bet you didn’t know the world of audio advertising also has a set of superheroes too, protecting marketers from low reach and unsuccessful campaigns.

Well, that’s the story that Eardrum founder Ralph van Dijk shared last week at the IAB Audio Summit in Sydney, revealing the identity of the four superheroes that make up the Audio Justice League. As well as spilling the beans on their most impressive superpowers and successful missions, he also shared very valuable insights into their respective kryptonites.

Gai Le Roy takes up the story, outlining what van Dijk had to say:

Superhero number one is Streamer, who collects playlists with the touch of her little finger and recommends new songs based on your favourites. She features long data cables to store all that information and wears headphones to monitor your listening habits.

Streamer’s superpower is data. She starts collecting data on users’ behalf the moment they sign up, capturing everything from their tastes in music, when and where they listen, what device they listen on, how long and how often.

To know just how much data Streamer has on each user, you only need to look at the way Spotify advertises its own streaming service – that is: marketing gold.

Think of it this way: just because Streamer’s got a lot of data, it doesn’t mean people like being reminded of exactly how much she knows. It can sometimes feel downright creepy.  So marketers beware – if you don’t take the kryptonite into account you run the risk of turning Streamer from a superhero to an audio villain.

Podcaster is a very different superhero. He comes to the rescue only on demand, entertains and educates during menial tasks and proves there’s hope for the attention spans of mere humans. He’s an odd-looking hero, complete with a microphone to whisper content into our ears, eyes to hypnotise audiences to share using word of mouth, and a magnet for unparalleled loyalty and engagement. He’s even got the power of levitation, which signifies that high net worth individuals are listening in their droves.

Without a doubt, Podcaster’s superpower is engagement: persuading people to listen to an average of 6.5 hours of content every week. Thanks to Podcaster’s incredible talents, hot new podcast recommendations are the new social currency.

This incredible engagement creates fiercely loyal listeners who are huge fans of their shows and their hosts. For marketers, that means it’s critical your brand also sounds like a fan of the show, especially if it’s a campaign where the host reads the ad out loud.

Australia Post’s ads in Gimlet’s ‘Reply All’ weave in seamlessly with the podcast itself. They tell an interesting story – in the style of the show – and are presented by the host. It’s a great example of how if your ad follows the format of the show, listeners will welcome it as they do the content itself.

Of course, Podcaster has his kryptonite too: ads that use the wrong tone of voice for the show they’re on. This may be caused by inappropriate programmatic placement, or it could be the marketer has simply repurposed the same ad from a completely different show or environment. For example a chirpy, cheery radio ad would feel wrong if it were placed just before the cliffhanger in a true crime podcast.

Captain Radio is an old-fashioned kind of superhero, boasting lightning speed to market, the ability to connect people to their local communities in real-time, and has the lion’s share of listeners in Australia. He surfs the free airwaves to broadcast far and wide, has a massive reach, and tends to tap into what’s happening live, right now. And don’t forget he also has a winning personality.

Captain Radio forms part of the Audio Justice League thanks to his superpower: reach. With 17 million Australian listeners a week, he’s able to create a national presence with a local flavour and because listeners are habitual, so brands can become a regular part of their customers’ lives and daily routines.

Like Streamer, Captain Radio lets marketers tailor their ads to specific locations. On top of  that, his special extendable hands can be used as an outreach medium, driving consideration and enticing consumers into the market.

When P&G – the largest advertiser in the world – faced decreasing revenues in 2016, the company announced it was cutting back its spend on performance digital advertising to explore other channels, including Captain Radio. P&G spent six times as much on radio in 2017 as it did  in 2016 with the largest increase for their Tide brand.

Captain Radio’s kryptonite is the use by marketers of one-off, stand-alone ideas where the brand isn’t being built over a long period of time. A lack of brand audio assets can also damage Captain Radio’s superpower, because listeners aren’t able to immediately place who the advert is by.

The Voice is the newest superhero, with an arsenal of skills that are constantly growing and huge potential. She’s a little smaller than the rest of the superheroes at the moment, but is definitely going through a growth spurt thanks to her desire to do the searching for users while they get on with more important things.

Interaction is The Voice’s superpower. She answers when she’s called, she listens to our problems and does everything in her power to help. There’s no limit to what marketers can do in terms of harnessing the power of The Voice’s instant response – all she needs is a little injection of creativity to help her shine.

The Voice is so new that her super powers are still being explored and tested. In the future though, increasing use of the Voice will mean that before long we’ll be measuring voice-through rates on our audio ads.

Imagine you’re driving home from work, listening to your radio via a voice-activated entertainment system. An ad for your local pizza place comes on, and they describe their latest delicious special. The ad prompts you to, “order one now and get $5 off, just say ‘yes pizza’”.

Your account will already be set up on your device, The Voice will know your payment information, your address for delivery, and how far away you are from home. She’ll take care of it all for you. That’s The Voice’s future mission: we’re not quite there yet, but she’s on her way.

One thing that the Audio Summit made clear, though, is that whichever superhero you decide is going to be the best fit to help solve your business problems, make sure you invest in getting the message right. Audiences are increasingly navigating the world through their ears, but it’s not enough to simply reach them. You need to move them, and if you use their superpowers for good, the Audio Justice League is here to help you do exactly that.

Gai Le Roy is the CEO of IAB Australia