A 15-metre-long mural of women breastfeeding and pumping appeared on Johnston Street in Collingwood on Monday August 1. They’re calling it ‘Breastralia’.

Following the brand’s award-winning 2021 campaign with Manifest, ‘The Boob Life’, ‘The Truth Is’ launched earlier this year. A video ad depicted the struggles, juggles and judgements of parenthood. Tommee Tippee then encouraged parents to share their own candid stories with #TheTruthIs hashtag. The campaign coincided with International Women’s Day’s #BreakTheBias theme.

Naturally, the company – which sells breast pumps and nipple cream – is now looking to join the conversation about ending the stigma of public breastfeeding. Breastrailia’s unveiling was timed with the start of World Breastfeeding Week. At the end of the mural is a comforting statement: ‘The truth is: Everyone’s feeding experience is different and that’s OK.’

Breastralia looks at changing perceptions of breastfeeding and pumping in public

Painted on one of Melbourne’s busiest inner city streets, the mural is designed to ‘stop you in your tracks’. It also aims to ‘transform how society speaks to mothers’.

The mural is a response to Tommee Tippee’s own research about new mums. It found that three in four women felt overlooked. Two thirds of participants said that society talks down to them as a new mum. What’s more, 46 percent said that feeding has negatively impacted their self confidence.

“As women, we’re constantly told to cover up or judged for how, where, when and even for how long we choose to feed,” said one of the campaign’s ambassadors and former WAFL player Moana Hope.

“Public art like this is so important because the truth is when women feel judged for feeding in public, they’re rarely imagining it,” she said.

As part of the campaign, Tommee Tippee encouraged those not in Melbourne to get involved by ‘flashing their feed’ with the #breastralia hashtag.

It has also pledged to donate pumps and pads to Big Group Hug, supporting families in need. 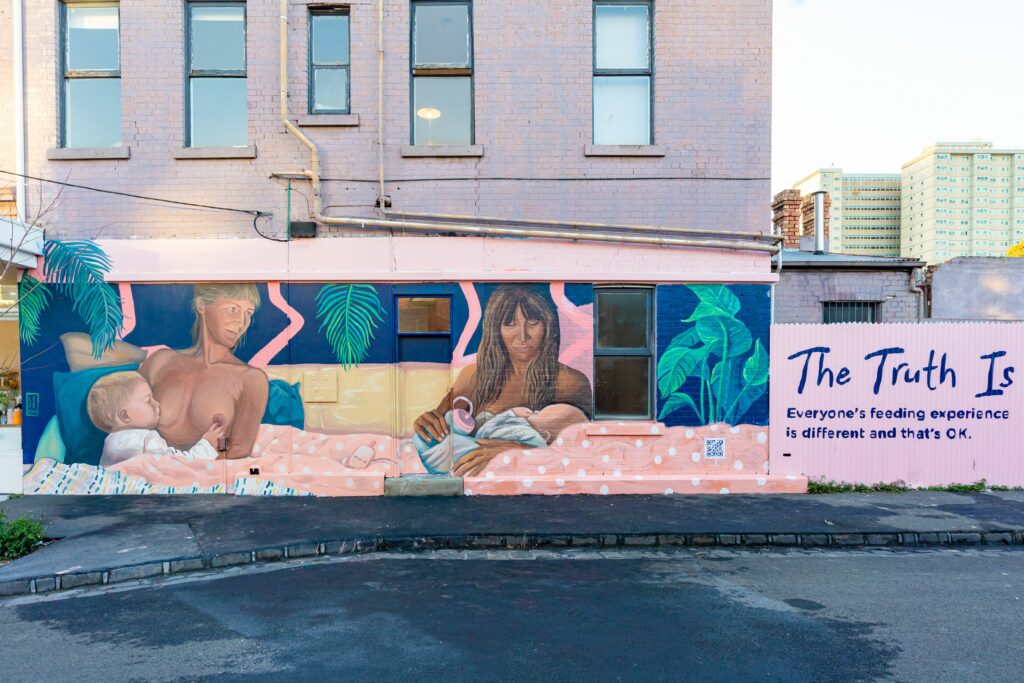