The Sydney Morning Herald has extended its lead as the Australian publication with the largest cross-platform audience, now reaching 3,392,000 people in an average week, according to Roy Morgan Research.

The newspaper’s total readers increased 7.5% in the year to June 2014, despite losing 87,000 print readers. Its digital audience from online and apps increased by 237,000 people.

The Herald Sun‘s readership totalled a loss, as 187,000 fewer people read the paper in print, while its digital audience grew by just 164,000.

The Age was the country’s only newspaper to increase its print readership, up 3% for the average issue.

“The proportion of all newspapers’ total audiences who are accessing the content via website or app has grown in the past year. Between 42% and 79% of each newspaper’s audience is now using a computer, mobile or tablet to get its news fix.”

Better Homes and Gardens is at number one, up 3.2% year-on-year to 1,819,000 readers per average issue, according to Roy Morgan data. Measurement competitor EMMA put the publication’s audience figure at 2.6 million including print, digital and television.

Home and Garden magazines together grew by 2.1% from June 2013 to 2014, with two-thirds of all titles in the category posting gains.

A new rail advertising platform, XtrackTV, will give advertisers to access of 8.4 million contacts per week through a digital broadcast network of screens at Sydney and Melbourne’s busy train stations.

XtrackTV producers APN Outdoor says the new rail advertising platform takes on an industry and world first format, as the only large format, cross-platform digital screen network at this scale.

The media will be sold in packages of 62 panels – 32 in Sydney and 30 in Melbourne, for advertising of 15 seconds with weekly, six month and 12 month purchasing options.

XtrackTV media space is for sale now, with the hardware is expected to be complete by October. Val Morgan Cinema Network has released the results of a study finding cinema advertising produces a 40% increase in brand consideration.

This builds on previous research findings that showed cinema to deliver six times the engagement of television.

“The results unequivocally show that cinema increases campaign effectiveness. The strength of these findings clearly demonstrate that cinema should be included as a core component in an advertisers a/v strategy.” 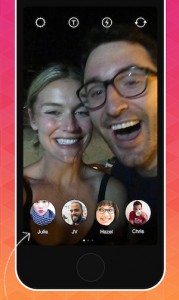 This one-to-one visual messaging app captures and sends photos and videos quickly and simply in a similar way to Snapchat. Once users swipe away a Bolt message, it’s gone.

“Mobile messaging is how people communicate today, but sharing an image still takes too many steps and too much time. Bolt was built to be fast and simple – it’s for communicating in that moment with people you’re close to, as quickly as possible.”

This new app is designed for public figures such as athletes and musicians to monitor and join conversations involving them.

Nearly 800 million people are connected on Facebook to public figures, creating more than a billion interactions between public figures and fans every week.

LinkedIn Connected provides users with relevant updates about people in their network, in order to strengthen professional relationships and “take the work out of networking”.

The new app shows relevant and timely updates including news such as job changes, birthdays and work anniversaries and more.

David Brubacher wrote on the company blog: “We know relationships matter to you because in an average week there are more than nine million comments, likes and congratulations posted across LinkedIn for updates like job changes, birthdays, being mentioned in the news and work anniversaries.” 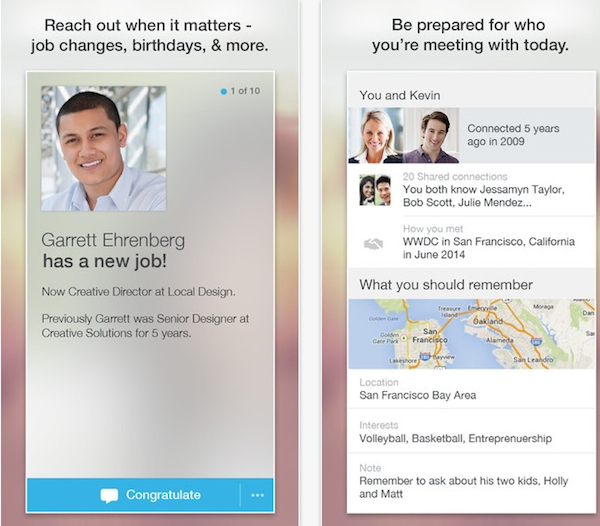