Australians open to receiving mobile ads – for a price

Australians open to receiving mobile ads – for a price

37% of Australia’s smartphone users are open to the idea of receiving ads on their phones in exchange for a discount on their bill or extra monthly data, a study by Roy Morgan Research has found.

The concept itself isn’t new – in late 2015, Lebara became the first local provider to offer a similar deal with the app ‘Unlockd.’

After downloading the app, users receive ads every few times they unlock their phone, and in exchange receive a discount on their bill or extra data.

Dodo customers have indicated the most interest in the concept, with nearly half (47%) saying they’d be open to receiving ads.

iiNet users were the least likely to be interested, with only 27% indicating they’d be open to receiving ads. 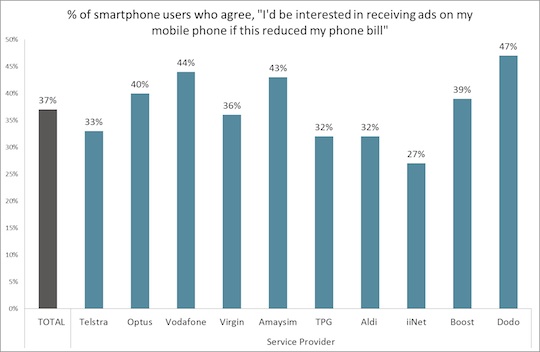 “There are around 1.1 million smartphone customers at Vodafone and 1.3 million at Optus who could be interested in an ad-supported plan – that’s the sort of reach attained by the weeknight news on commercial television networks,” says Levine.

While the concept has tremendous upside, Levine believes the challenge, and the only way to use the technology effectively, is to understand the audience.

“The future challenge for advertisers and their media agencies using this new, broad-reaching channel will be to achieve accurate and cost-effective targeting – and the only way to do that is to understand the people holding each device,” says Levine.