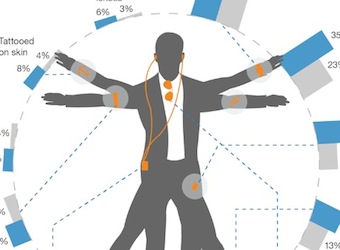 Ahead of the world’s largest consumer electronics trade show, analysts are predicting that wearable technology will be big news – and looking beyond the devices themselves is a sign of a maturing wearable device market, says one.

The interconnected web of objects and people, via wearable technology, is a hot-button topic for brands at this year’s CES, the world’s largest consumer electronics trade show, taking place in this week.

Making predictions ahead of the trade show, Forrester analyst JP Gownder says it’s important to remember that wearables are as much about the service ecosystem as the devices themselves.

“We’re living through a period of creative destruction in the smart, connected devices space,” Gownder says. “But some of these devices will reach a more mature stage, integrating into how people live their lives, how workers do their jobs, and how companies interact with their customers.”

“Wearables aren’t just about devices; they’re about cloud-based services that take data from wearables and return insights to them as well. We’ll see a broader focus on services, particularly from companies like Samsung, Microsoft and Google. We’ll see more evidence that services link together customers and value-added services in areas like health, fitness, tracking children and pets, and workforce enablement.”

The graphic below displays Forrester’s data on where on their bodies people in the US and Europe would want to wear sensors.