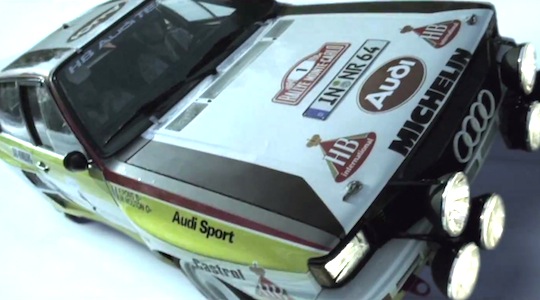 Audi Australia is launching a new brand campaign to redefine the company’s reputation as an innovator ahead of a major new wave of products.

The campaign uses archival footage to take a look back at Audi’s heritage as a technology pioneer to show consumers why the company’s passion and commitment continues to drive innovation for the future, says Audi Australia managing director, Andrew Doyle. “It details the aspiration, inspiration and sheer hard work of the people who build Audi vehicles, for the pleasure of those who own and drive them,” he says.

“We’ve spent more than 100 years striving to out-do every milestone, every piece of technology we have ever created, to deliver the best in premium quality and craftsmanship for our customer.”

CASE STUDY: How Audi increased test drives by 28% with its first ever Australian-made campaign ‘Land of Quattro’. Read more »

A three-part television campaign, the new advertising focuses on core values. ‘Challenges’ (video below) refers to the company’s future facing strategy which has seen numerous milestones reached thanks to advanced technology. ‘Details’ focuses on the company’s attention to detail and quality. ‘Audi versus’ combines the brand’s heritage as an innovator, and technological know-how to clearly demonstrate it’s ‘Vorsprung durch Technik’ core message.

The campaign, voiced by actor and Audi brand ambassador, Richard Roxburgh, will be initially launched as three separate 60-second TV spots and followed up with a 30-second version of each. It will be supported with a strong social media buy, online video and in Hoyts Lux cinemas.

“Recent research undertaken by our brand showed us that luxury car buyers don’t have a clear understanding of the way Audi has consistently challenged conventional thinking throughout the ages and this is what our new campaign seeks to address,” Doyle says. “We’re the youngest premium German brand in Australia and in a market as competitive as ours, reinforcing Audi’s rich and successful legacy in Europe is a message worthy of telling. We have consistently out-performed ourselves in terms of innovation and this campaign will help us to express our proud heritage.”

The creative executions did not require any new material to be shot, says Audi Australia’s general manager of marketing, Kevin Goult said t. “Audi and the creative team at 303MullenLowe found that the archival footage was comprehensive, detailing so many innovations throughout the ages that nothing new was needed,” he says. “The reality was that we have been busy doing all of these great things for over a century!”