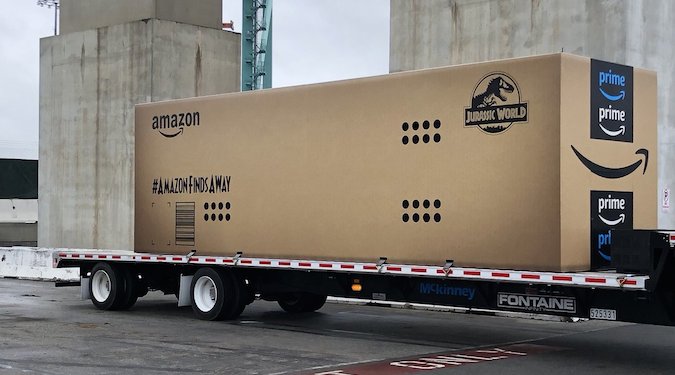 Imagine if Amazon shipped dinosaurs to your doorstep. Last week it did – sort of. An enormous pet crate was spotted driving around the streets of Los Angeles.

On 30 May, you could have been forgiven for taking a second glance as you watched a comically large Amazon Prime pet carton, escorted by police and a fleet of black SUVs, being hauled through the streets of Los Angeles on an 18-wheeler.

The box, adorned with air holes and Jurassic World branding, provoked the type of reaction you would expect. Twitter user @itsJustinJeez wrote, “Hey @amazon – you guys ship dinosaurs now? Is that included in my Prime membership?”

To the disappointment of many fans, the box was revealed to contain not an ancient predator of any sort, rather the new Jeep Rubicon.

Staying in character, the shipping label was made out to the Jurassic World franchise’s protagonists, Owen Grady (Chris Pratt) and Claire Dearing (Bryce Dallas Howard). Also featured was an Amazon SmileCode (Amazon’s proprietary QR – quick response – function) and an instruction to question Alexa, ‘What’s in the box?’

Scanning the code took users to a landing page with discounted tickets to Fallen World and a 45-second spot showing the box’s shipment. Watching the video may lead viewers to believe that Amazon was indeed transporting a dinosaur, but the real contents did much less growling.

Amazon has pulled the car delivery stunt once before. In 2014 the retailing giant teamed up with Nissan to ‘sell’ the Versa Note hatchback over Amazon’s platform. In reality, the service only put users in contact with their local Nissan dealership. For three lucky customers, however, Amazon trucks were loaded with boxed up hatchbacks (and accompanied by camera crews) for literal home deliveries. Who needs ‘drive-away’ when it can be driven to you?

Jeep’s relationship with the Jurassic series goes back to its the franchise’s inception. A 30-second spot anticipating Fallen Kingdom’s release paid homage to the original 1993 film Jurassic Park, with Jeff Goldblum as Malcolm making his desperate escape from a T-Rex in a Jeep Wrangler. Cut to Goldblum’s modern day revenge fantasy, chasing down the same T-Rex in a 2018 model of the same car.

The campaign was spread over social under the hashtag ‘Amazon finds a way’, calling back to Malcolm’s famous quote from the first movie, “life finds a way”.

The reception online was overwhelming positive. Blending novelty and spectacle, this campaign stirred up a flurry of excitement; some even proclaimed they would drop everything to travel to LA and catch a glimpse. This is to be expected when the biggest retailer in the world teams up with one of the most iconic movie franchises of all time; unfortunately, though, you can’t please everyone – @_ArKhan_ wrote, “When you get stuck in traffic because someone just had to have their #dinosaur shipped #amazonprime.”

When you get stuck in traffic because someone just HAD to have their #dinosaur shipped #amazonprime . The airlines must have not let @prattprattpratt take #Blue on as his service dinosaur #jurassicworld #velociraptor #AmazonFindsAWay #onlyinlosangeles @JurassicWorld pic.twitter.com/9hMztK3wX8