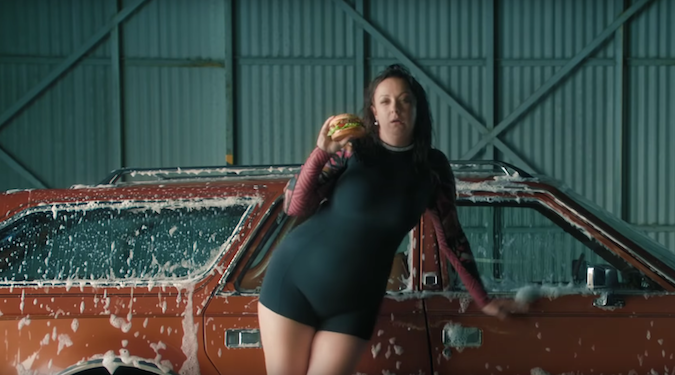 For the longest time, the internationally recognisable hallmark of a Carl’s Jr ad has been a scantily clad supermodel eating a burger in some compromising circumstance. The burger chain’s latest round of advertising, however, seems to join the rest of the world in ridiculing the infamous ads.

Where Hilton once administered a sponge bath to a black Bentley, Barber pays the same careful attention to an ordinary station wagon.

CKE Restaurants (parent of Carl’s Jr) CEO Jason Marker says the company has “100% stepped away from that burgers and bikinis strategy.

“That advertising strategy created an edge for the brand internationally and we obviously want to maintain that boldness and that disruptive tone.

“We’re going back to what we stood for which is the best quality and most outstanding food. The category is driven by taste, convenience and value. The number one driver in the category is taste. All our advertising moving forward is food-centric.”

Carl’s Junior opened its first Victorian store late last month, offering 50 of the store’s first customers a year’s worth of free burgers. The chain first entered the Australian market in 2016 via George P Johnson, its first store launching in NSW’s Bateau Bay. At the time, the burger brand hadn’t yet abandoned its “burgers and bikinis” strategy, affording Sydney model Gemie Howe the same treatment as the spokeswomen before her.