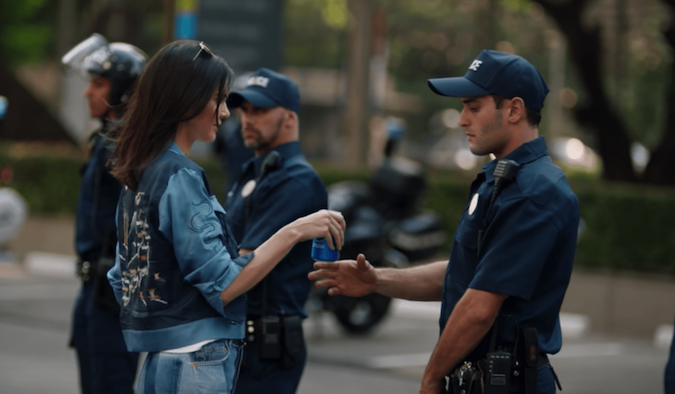 Pepsi has issued an apology, claiming it ‘missed the mark’ with its commercial starring Kendall Jenner.

Pepsi has pulled its commercial starring Kendall Jenner and issued an apology after a swift and severe social media backlash.

The ad featured the star posing for a photoshoot in a blonde wig. When she notices a protest happening outside – populated by gay, black and transgender people – she removes the wig and joins the crowd. She then confronts a riot policeman and hands him a Pepsi, and everyone’s happy.

It was criticised for playing on and trivialising serious issues like racial and political tension, and police treatment of black Americans.

The commercial and public outcry has re-ignited the debate as to whether or not brands should mix politics with their advertising.

Many cases in recent times have demonstrated that aligning with political messages can be a win both for brands – and for the causes they support – through wider coverage and associated positive publicity afforded by big brand ad budgets and in many cases, actual support – financial or otherwise.

Pepsi’s video, on the other hand, missed the mark for a number of reasons. Instead of actually demonstrating real support for the groups it featured, it really just used their struggle as a backdrop to promote its product as something enjoyable which unites people through fun times.

The ad trivialises issues that are very real and serious, such as the plight for equality and the Black Lives Matter movement. Pepsi’s use of political unrest as a backdrop for brand placement foolishly suggests that issues, for example police brutality, could be solved by two parties sharing a drink, when in reality it needs to be addressed through self-assessment and serious work to unravel decades of systemic and subconscious racism.

It suggests that its product is able to break down social barriers and solve real problems in the community. Brands that have played more successfully in this area have been able to highlight social problems, deliver a message calling for support from the broader community, and work in their brand in a more considered fashion, rather than use the issue as a backdrop for product placement.