GE is taking its ‘Tweeting Machines’ campaign global after success in Australia and New Zealand. Dubbed ‘GEeks Go For #CC9900’ is part product demonstration of the internet of things and part computer science puzzle.

#CC9900 is the hex code for the colour gold but also functions as a hashtag for the challenge.

The campaign is designed to demonstrate the power of the ‘industrial internet’ and was launched to capitalise on GE’s Olympic sponsorship with all of GE’s smartest machines sending out tweets in their mother tongue: binary. 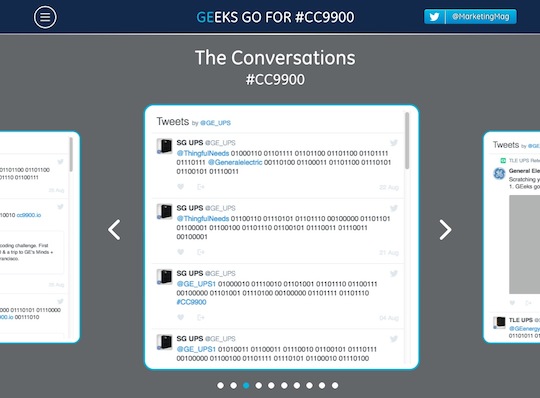 Hidden in the machines’ Twitter conversations is a coding challenge aimed at the world’s best software engineers and data scientists. Campaign posters and banners are also in binary to catch the attention of software engineers. The first to the finish line will win USD$10,000 and a trip to GE’s Minds + Machines conference in San Francisco.

“GE is a digital industrial company and this campaign is a very tangible demonstration of that,” says Emma Rugge-Price, VP, brand and communications at GE Australia and New Zealand. “It showcases the Industrial Internet in a way that’s really compelling for our audience and it’s great to see our global markets get behind the challenge.”

The original ‘Tweeting Machines’ challenge took around three weeks to solve. As of day eight of this round, the site had over 50,000 visits. “360 are already through to the final stage. Shouldn’t be too long till some ‘beautiful mind’ cracks the winner’s podium,” says Paul Nagy, executive creative director at Clemenger BBDO.

The challenge is being supported in a multichannel campaign across Australia, Canada, New Zealand, the US, Germany, France, the UK, Hungary, Turkey, the Middle East and Brazil.

Resource: Learn how the marketers and brands of Australia will be impacted by the internet of things in Marketing‘s trend briefing. More info »